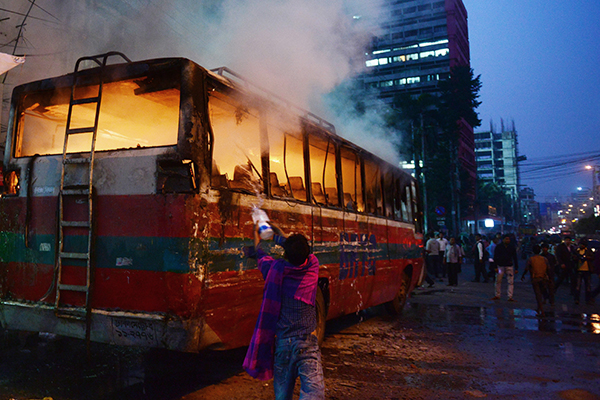 Bangladesh’s Prime Minister Sheikh Hasina is certain to cement her grip on power this Sunday at elections boycotted by her rivals and shunned by the West after unprecedented bloodshed.

While Hasina says the election will allow her to “eliminate militancy,” analysts warn it will spark more unrest after the bloodiest year in Bangladesh’s short and troubled history.

The turmoil has dimmed hopes of improving the lives of Bangladesh’s 154 million people, a third of who live below the poverty line. “Fight or Farce?” read the front-page headline in the best-selling Daily Star, full of pictures of burnt-out buses and victims of petrol-bomb attacks.

The main opposition to Hasina’s Awami League, the Bangladesh Nationalist Party headed by former premier Khaleda Zia, and 20 other political parties are sitting out the elections in protest over Hasina’s refusal to install a neutral caretaker regime to oversee the polls. As a result, Awami League members and allies are running unchallenged in 153 of the 300 races.

A poll in the normally pro-government Dhaka Tribune on Friday showed 77 percent of voters were against the election without the BNP. The same survey showed the BNP would have won a narrow victory over Hasina’s Awami League.

In a final election address on Thursday, Hasina vowed to turn Bangladesh into “a middle-income country” by the turn of the decade and solve its chronic power problems. But the most impassioned section of her address came when she denounced BNP’s Zia, who has tried to derail the polls with mass protests. “She held the people hostage in the name of strikes and blockades,” Hasina said, blaming Zia supporters for the deaths of civilians and security forces.

“It’s not an election. It’s shameless selection,” Zia said as she announced a march “to save democracy” that was meant to have taken place last weekend. But the protest was stopped in its tracks by a massive police operation and Zia is now under de facto house arrest.

The two women’s poisonous relationship, which dates back three decades, has torpedoed all attempts at compromise. When they did talk on the phone in October, their 37-minute conversation ended up in a slanging match.

Last year was officially the deadliest year for political violence in a country that has experienced nearly 20 coups. More than 140 people have been killed in election violence since October—bringing the overall death toll in political unrest to more than 500, according to local rights activists. Some of the bloodiest violence has been in clashes between security forces and supporters of the Jamaat-e-Islami, the largest Islamist party, several of whose leaders have been sentenced to death for crimes dating back to the 1971 civil war.

Many of the victims have been passengers traveling on buses when they were bombed with Molotov cocktails. Activists from pro-government groups and Islamist factions have attacked each other with machetes and sharpened staves. Alarmed by the violence and the arrests of thousands of opposition supporters, the U.S. and the EU have refused to send observers. Expressing “disappointment” at the boycotts, the U.S. State Department said last month it would only be prepared to send in observers “in a more conducive environment.” The EU said it would not send observers, saying authorities had not been able “to create the necessary conditions for transparent, inclusive, and credible elections.”

After meeting Zia at her home on Tuesday, U.S. Ambassador Dan Mozena called for an end to violence and denounced the arrests for “the intimidating effect that this has on those who wish to peacefully exercise their democratic rights.”

Imtiaz Ahmed, a professor at Dhaka University, said the polls had lost all credibility given the outcome was not in doubt and warned more violence would flow. “The violence could further intensify after the polls if there is no attitude of compromise,” he said. “We may see more protests including strikes and blockades called by the opposition and the government could take a more hardline stand.”

Ahsan H. Mansur, of the Dhaka-based Policy Research Institute think tank, agrees. “Unfortunately this election is not solving any of our problems, rather it aggravates them,” he said. “Any democratic process should have an opposition. But if the opposition is suppressed, marginalized or even weakened, it will lead to extremism—in our case Islamic militancy.”

Bangladesh is the world’s eighth most populous country and spans 147,570 square kilometers. Ninety percent of its population is Muslim. Islam is the state religion but the country has a system of secular laws dating back to British colonial times.

Bangladesh is also the world’s second largest apparel exporter after China, with textiles making up around 80 percent of exports—$22 billion in the year ending June 2013. The other key export is manpower, with around 10 million Bangladeshis believed to be working abroad. In 2013, they sent home around $15 billion in remittances. The economy grew an average 6.2 percent a year on average over the past five years. Its GDP is around $153 billon.