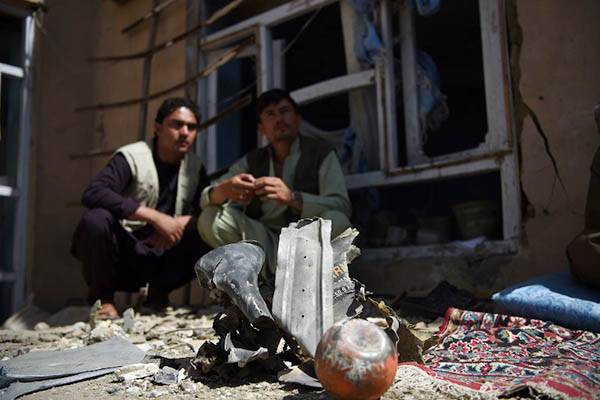 Victims of U.S. airstrike in Kabul lash out at foreign forces for mistaken attack

Haji Rabbani was preparing for afternoon prayers when he saw the U.S. helicopters hovering above his mud-brick house in a residential area of Kabul. Moments later bombs started raining down.

Six members of his family, including four children, were wounded in Wednesday’s airstrike that was supposed to hit insurgents fighting Afghan security forces several kilometers from where U.S. Defense Secretary Jim Mattis was meeting with officials. Two bombs struck Rabbani’s home—several hundred meters from where the insurgents were holed up—destroying an upstairs room, shattering windows and sending debris toppling into the courtyard.

NATO’s Resolute Support mission in Afghanistan expressed regret for the “harm to non-combatants” caused by the U.S. airstrike—the first carried out inside the city in recent memory—and blamed a defective missile. An investigation is under way.

The strike was launched in support of Afghan security forces who had confronted militants armed with mortars and suicide vests after they fired a volley of rockets near the capital’s international airport—hours after Mattis arrived in the country for a high-profile visit. One person was killed and 11 wounded—including the six people at Rabbani’s house—in the fighting that lasted several hours as Mattis and NATO chief Jens Stoltenberg met with Afghan leaders to discuss the broader conflict.

Both the Taliban and the Islamic State’s local Khorasan province affiliate claimed responsibility for the rocket attack.

After the airstrike Rabbani ran inside his home to get his family out. A child in the upstairs room that took the full force of the explosion was on the floor, mud bricks covering most of her small body. “I just got out of the bathroom and came out to perform the ablution when the strike took place,” Rabbani told AFP on Thursday as he sat on a carpet in his debris-covered courtyard, smoking and drinking green tea with relatives. “I rushed towards the house and shouted for my children.”

Shrapnel from the bombs had peppered the rooms and blood spatters could be seen on doorframes, walls and in the courtyard.

Rabbani said he did not understand why foreign forces had targeted his family when he had no links to the insurgents firing rockets near the airport. “I do not belong to the government nor am I affiliated with anyone. I am a poor person who works in the city,” said the 49-year-old taxi driver.

Large fragments of the bombs lay on the ground nearby, one piece showing a partial label that read “50.9 KG.”

“There are no Daesh [Islamic State] or Taliban in this area and the fighting is almost three kilometers from here—and they bombed my house.”

It is not the first time a U.S. bombing attack has hit the wrong target. An American airstrike in 2015 destroyed a Doctors Without Borders trauma center in northern Kunduz province, killing over 40.

In July a U.S. airstrike killed 16 policemen in Helmand province. It came after a U.S. strike in Helmand’s Sangin district killed at least 18 civilians, mostly women and children, in February.

Rabbani and his family have joined a growing list of civilians who have become casualties of Afghanistan’s grinding 16-year war. The number of civilians killed and wounded was at a record high in the first six months of 2017, a U.N. report shows, made worse by the Afghan Air Force carrying out its own airstrikes along with U.S. Forces.

“Airstrikes carried out by international and Afghan air forces caused 590 civilian casualties [in 2016], nearly double that recorded in 2015,” a separate U.N. report shows, with women and children accounting for more than half of the victims.

While NATO has acknowledged its mistake, Rabbani’s family wants compensation not sympathy—and for the strikes on ordinary Afghans to stop. “They do not target the enemies in front of their eyes—they target our house and kill our people,” said Rabbani.