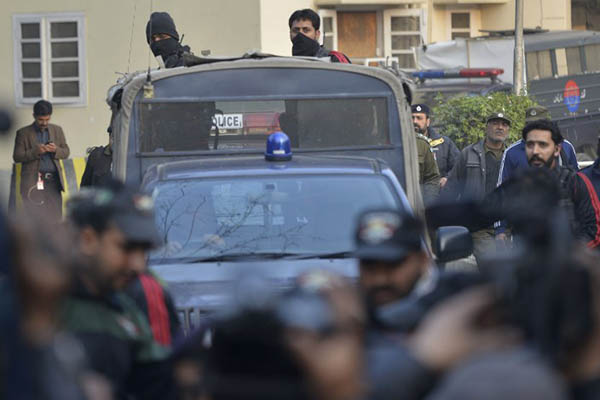 Angry Pakistanis called on Wednesday for the public execution of a suspect accused of raping and murdering a girl in a case that enraged the country and stoked fears a serial killer was preying on children.

The suspect, Imran Ali, was remanded in custody for 14 days by an anti-terrorism court in Lahore one day after his arrest over the rape and murder of six-year-old Zainab Fatima Ameen in Kasur.

As Ali appeared in court under heavy security on Wednesday, Pakistanis across the country demanded capital punishment on social media. “Hang the child killer publicly now!! Nothing less than death penalty!” wrote one user on Twitter.

The arrest was made after officials confirmed that Ali’s DNA had been recovered from the scene of the crime and matched samples from seven similar recent cases in the area. “His DNA has matched all eight cases and he has confessed,” Muhammad Sajid, a police spokesman in Kasur, told AFP, adding that three of the victims had survived after being brutalized in the mentioned incidents.

At least four other cases of rape and murder have been recorded in the Kasur area in the past two years, but it is not yet clear if they are linked.

Ali’s court appearance came as new details emerged about his behavior following the murder of Zainab. According to the victim’s father Ameen Ansari, Ali—who lived nearby—had participated in the initial protests that erupted after Zainab’s body was discovered.

“He was the person who insisted upon continuing the protests and keeping the body of Zainab on road when we had negotiations with the police chief and agreed to bury Zainab’s body,” Ansari told AFP on Wednesday.

Ansari said anger has been growing since the arrest with people calling for Ali to be “publicly hanged or stoned to death.”

Ehsan Ilahi, the father of another rape victim, who survived being brutally attacked but remains in a critical condition, said nothing short of torture would suffice. “His fingers and hands should be broken. He should be given wounds,” said Ilahi.

However, doubts remain over whether police have succeeded in capturing the correct assailant in the case. Muhammad Ayub, the uncle of another victim, said police had a troubling record in similar cases.

A BBC report last week accused police of the extrajudicial killing of a man wrongfully accused in one of the earlier murder cases. “Police had already killed three people wrongly in such cases. It may be another attempt of police officials to wash people’s eyes,” Ayub said.

Pakistan’s forensic experts remain confident they have nabbed the true culprit. “Our 50-member team of DNA scientists… conducted tests on 60 to 70 people every day until they traced the culprit,” said Rana Muhammad Shafique, a senior official at Punjab Forensic Science Agency, Pakistan’s only forensic laboratory.

Prior to the recent flood of cases, Kasur was already infamous for sexual abuse, after authorities uncovered a huge pedophilia ring in the city in 2015.