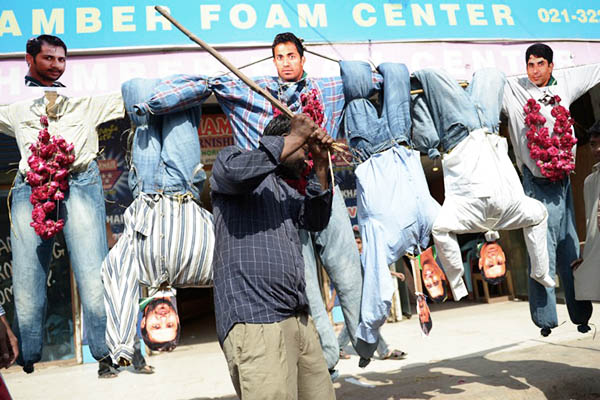 Supporters in Multan stage mock funeral with bats on top of a coffin.

Angry Pakistan cricket fans smashed TVs and staged a mock funeral for the team Friday after poor batting and sloppy catching saw them dumped out of the World Cup.

A limp display with the bat saw Pakistan bowled out for just 213 and co-hosts Australia chased the target down with relative ease to win by six wickets despite a fiery spell from fast bowler Wahab Riaz. News channels showed footage of fans smashing up a television set in anger at the team’s elimination.

In Multan around 50 fans organized a symbolic funeral procession through the streets, complete with a coffin with bats on top. Multan’s residents are given to dramatic protests and staged a similar event after Pakistan’s humiliating 150-run defeat to the West Indies earlier in the tournament.

Downcast fans in Islamabad slammed the side’s poor fielding, after two simple chances went down at crucial stages in the Australian innings. “They did their best but they get pressurized easily, that’s why they made a lot of mistakes in their fielding,” said Mubashir Khan. “Two men dropped catches, that’s the main reason for our loss.”

But there was praise for Riaz and the other bowlers, particularly as the side lost several key players to injury and suspension in the months leading up to the World Cup. “I’m really disappointed. But our bowlers played really well and we reached the quarter-finals,” said fan Jahanzeb. “This team is our B-team. Our main players are not there. Overall it’s a good performance, but today, it’s really bad.”

The defeat was set to bring the curtain down on the one-day international careers of captain Misbah-ul-Haq and big-hitting all-rounder Shahid Afridi. The hashtag #ThankYouMisbah was trending on Twitter in Pakistan in the hours after the match as fans hailed the 40-year-old captain, whose steadying influence has pulled the side out of trouble more than once.