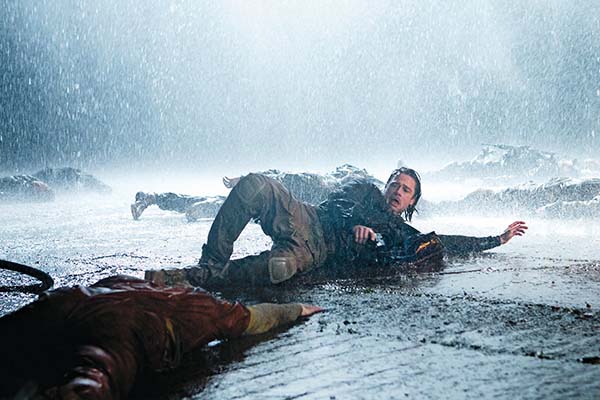 Can Brad Pitt sell audiences on the walking dead?

[dropcap]T[/dropcap]he stakes are enormous. With its distribution deal with superhero factory Marvel kaput, Paramount is desperate for a new film franchise to hang its hat on—and zombies, experiencing a renaissance of sorts, seem like a solid bet.

In 2007, actor Brad Pitt’s production company, Plan B Entertainment, acquired the rights to Max Brooks’ 2006 bestselling novel World War Z, a sequel to his earlier book The Zombie Survival Guide, after a heated bidding war with Leonardo DiCaprio’s Appian Way. After several years of script rewrites and searching for financiers, the film hit theaters this month.

Paramount initially budgeted the project at $125 million, reported New York magazine, with the studio hedging that audiences could be sold on a large-scale zombie franchise the way they historically have with superhero flicks. After all, zombies have infiltrated the public consciousness—from the Miami face-eater to AMC’s hit TV series The Walking Dead, whose Season 3 finale notched 12.4 million viewers, making it the most watched drama series in basic cable history in the U.S. And the zombie genre, with its superstitious adversaries, seems well suited to address our global modern-day fears and anxieties—ones that have surpassed those of a more insular era dominated by superhero films, which reinforce a sense of security, idealism, and rah-rah patriotism. But has Paramount bitten off more than it can chew? In a word: maybe.

In March 2012, the film’s release date was pushed back six months. During filming there were rumors of infighting between Pitt and director Marc Forster. A June Vanity Fair cover story explores the seemingly cursed making of the film, including the hiring of Lost scribes Damon Lindelof and Drew Goddard by the studio to fix the film’s third act, resulting in the axing of an action sequence and shooting additional footage to the cost of $20 million, according to Paramount CEO Brad Grey. Meanwhile, the film’s overall budget swelled to more than $200 million.

The 3-D epic centers on Gerry Lane (Pitt), a retired United Nations worker tasked with locating the source of a zombie plague that is crippling the world. After the president and four joint chiefs of staff die and the vice president goes missing, Lane is asked to leave his family behind to go on a global hunt for the origin of the virus, dubbed “patient zero.”

Brooks’ novel, subtitled An Oral History of the Zombie War, not only explores how and why the zombie outbreak occurs but also serves as a scathing critique of governmental ineptitude, American isolationism, and international diplomacy—or lack thereof. (As the son of Mel Brooks and Anne Bancroft, satire is clearly in his genes.)

The film has also done away with other politically touchy elements: Iran and Pakistan destroying each other via nuclear war, the infection being spread by the black-market organ trade.

Similarly, zombie films as a genre have a rich history of political and social satire. Dawn of the Dead, zombie godfather George Romero’s 1978 film, followed a group of Americans trapped within a shopping mall during a zombie uprising in order to critique U.S. consumerism. Danny Boyle’s 2002 film 28 Days Later commented on unfettered scientific experimentation, militarism, and the Hobbesian “state of nature” (and reinvented the genre by transforming the undead from limpers to sprinters). And in 2004, the zombie comedy Shaun of the Dead drew parallels between the monotonous routines of working-class people and the walking dead. The Walking Dead, with its crew of survivalists, poses questions about the group versus the individual, and our basic human desire to persevere. But political and social commentary isn’t what World War Z is after. Rather, the movie loosens its grip on the traditional conceit that has made the zombie genre so compelling—and successful—in favor of unabashed commercial appeal.

In the book, “patient zero” is revealed to be a young child in China. According to the Vanity Fair story, the film changed the suspected origin of the virus to South Korea in order to release the film in China without conflict. The film has also done away with other politically touchy elements: Iran and Pakistan destroying each other via nuclear war, the infection being spread by the black-market organ trade, and Palestinians initially believing that the outbreak is a scheme devised by Israel. Instead, viewers are treated to ambiguous scenes such as Lane viewing a nuclear mushroom cloud from a plane flying over the Middle East and a passing mention of the German black-market organ trade. These, along with other plot points—including how North Korea extracted 23 million pairs of teeth in a day to avoid the outbreak, what Lane’s credentials are to handle this pandemic (there are brief mentions of his involvement during the Liberian Civil War and the Second Chechen War), or how Israel managed to quickly erect a giant wall around Jerusalem—go unexplained.

The film, instead, goes for scale, and there has never been a zombie outbreak depicted on such a grand one. Thousands of zombies—a mix of extras and CGI—are seen ravaging Philadelphia, New Jersey, and Jerusalem from above (the siege of Jerusalem, where the zombies form a giant ladder to scale the city walls, is worth the price of admission alone). Pitt does a solid job flexing his movie-star muscle as a desperate man torn between his allegiance to his family and the fate of the world, flowing golden locks and all. And newcomer Daniella Kertesz steals every scene she’s in as an injured Israeli soldier who helps Lane on his quest.

But can a zombie franchise be built on Pitt’s star power and a studio’s high-powered special effects alone? World War Z’s “new and improved” ending is a far cry from the zombie battle royale that was shot prior to the movie’s overhaul; it’s intimate and suspenseful. It’s also a cliffhanger, so only time will tell whether Pitt and Paramount will be able to tell the whole story. Its fate is in the viewer’s hands.