Home Lightbox Are We Ready? 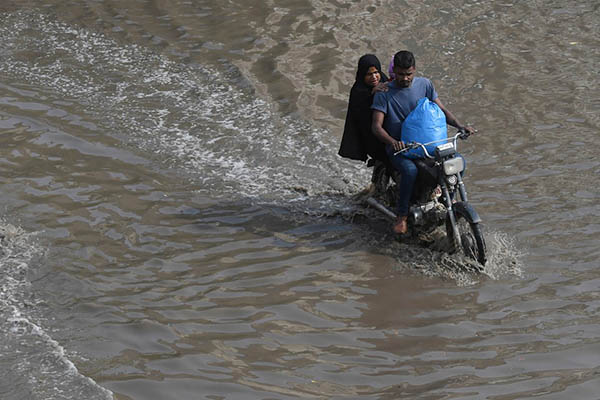 Several villages in Pakistan’s scenic Chitral Valley were washed out earlier this month, as a glacial lake burst its banks and inundated roads and farmland. There were fortunately no casualties, but the remote location was inaccessible to rescue services for nearly 7 hours, leaving locals and tourists alike stranded amid the rising waters. This isn’t a unique situation: every year, Pakistan experiences floods ranging from mild to severe, causing widespread damage. The Pakistan Tehreek-e-Insaf-led government, however, vows it is ready for any eventuality.

With monsoon rains now sweeping across the country, a senior official of Pakistan’s National Disaster Management Authority, who requested he not be identified, told Newsweek the current government had prepared flood response strategies at the district and provincial levels. The administration has stocked sufficient first aid and basic necessities, and secured emergency transport such as helicopters, he added, to ensure immediate action is taken in case of any natural disaster.

According to the Pakistan Meteorological Department, the annual monsoon reached the country in the first week of July. Heavy rainfall in neighboring nations such as India, Bangladesh and Nepal has already claimed over 100 lives and there is concern that Pakistan could suffer a similar fate. This week alone, major urban centers such as Rawalpindi and Lahore were inundated after heavy rains that are predicted to continue sporadically throughout the week. Federal Flood Commission Chairman Ahmad Kamal had even warned the National Assembly in April that the predicted monsoon pattern for this year could cause “super flood” this year, specifically citing 14 districts from Punjab province and 11 from Khyber-Pakhtunkhwa as most at risk. In a recent statement, the FFC doubled down, warning floods could occur in Lahore, Faisalabad, Gujranwala, Sargodha and Dera Ghazi Khan.

The Punjab government says it is already monitoring water flow in rivers and will issue flood warnings if levels hit critical points. It has announced that social media would be used to warn citizens of potential disaster. The provincial chief minister, Usman Buzdar, has even claimed—despite the FFC’s warning—that “no major floods” are expected this year. Regardless, his office adds, authorities are prepared for any eventuality. This includes a prediction by the Flood Forecasting Division of low-to-medium flooding near the Ravi and Chenab rivers, along with hill torrents in Dera Ghazi Khan division and sharp peaks of high level flooding in Mangla. Small- and medium-scale floods are limited to riverbanks, but can prove disastrous for anyone settled along those banks. This is especially concerning in Pakistan.

The riverbanks of Sutlej, Ravi, Chenab, Jhelum and Indus, as well as smaller secondary runoffs, accommodate many rural and urban settlements. Due to high fertility, these areas also consist of most of Pakistan’s arable land. These are at greatest risk of flooding during heavy rainfall and can cost billions in damages to Pakistan’s agriculture and infrastructure sectors.

The worst floods ever witnessed in Pakistan occurred in the summer of 2010, damaging millions of homes and causing irreparable losses of life and livestock. At one point, according to the World Food Program, about 70% of Pakistan’s population did not have access to enough food or safe water and the overall economic impact of the disaster was approximately $43 billion. Despite vows from all major stakeholders to prevent similar incidents from reoccurring, Pakistan still witnesses casualties from flooding every year. In 2018, 88 Pakistanis died due to flash floods; in 2017 it was 172; and in 2016 it was 153.

Fully preventing floods, or any natural disasters, is practically impossible. Ensuring minimum loss of life and property is, however, an achievable goal. After the 2010 floods that left nearly 2,000 people dead nationwide, Islamabad vowed to adopt flood management programs to prevent any similar calamities. The National Disaster Response Plan is part of that goal, listing potential at-risk sites and advising preventative measures. The PTI, under P.M. Imran Khan, has long referred to climate change and its consequences as one of the greatest challenges currently facing Pakistan. Ensuring minimal loss of life and property would prove it is willing to walk the talk.