Ariana Grande to Return to Manchester for Star-Studded Benefit Gig 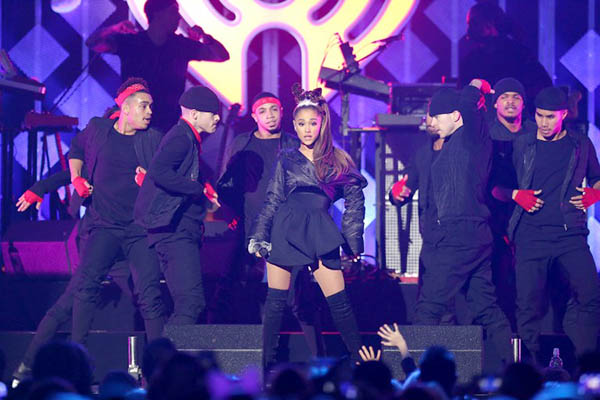 U.S. pop star Ariana Grande announced on Tuesday she would return to Manchester to headline a star-studded benefit concert for the victims of the deadly attack on her show last week.

Justin Bieber, Coldplay, Katy Perry, Miley Cyrus, Pharrell Williams, Usher and Take That will join her for Sunday’s concert in memory of the 22 people who died, seven of them children. “Our response to this violence must be to come closer together, to help each other, to love more, to sing louder and to live more kindly and generously than we did before,” Grande said.

The 23-year-old said she was “broken” and suspended her world tour after the bomb went off near an exit of the Manchester Arena venue at the finale of her show on May 22. Fans who attended that show will be offered free tickets to the benefit concert at the Old Trafford cricket ground, which has a 50,000 capacity for concerts, with the rest sold to raise money for the affected families.

Grande is a favorite of pre-teens and as well as the children killed, a number of the victims were parents who came to pick up their daughters.

Manchester-born Oasis frontman Liam Gallagher made his solo debut on Tuesday with a sell-out concert in aid of the bombing victims.

Like Grande’s, it raised money for the “We Love Manchester Emergency Fund” set up by the local council and the British Red Cross, to help the grieving families and victims.

Gallagher said it was important to move forward in the wake of the terror attack. “We need to enjoy life… We’ll be trying to lift people. Otherwise the poor kids who died at the gig have died in vain,” he told the Manchester Evening News.

As life in Britain’s third-largest city resumed a semblance of normality, the train station next to the attack site reopened earlier on Tuesday. “There’s still a weird feeling, you know, armed police, a lot of unease,” said 59-year-old David Keys as he got off a train at Manchester Victoria.

Troops were deployed at key public sites last week as Britain’s national terror threat was raised to maximum, and police hunted suspected accomplices of bomber Salman Abedi. The 22-year-old, who was born in Manchester to Libyan parents, was killed in the attack, which was claimed by the Islamic State group.

Britain’s threat level was reduced back from “critical” to “severe” on Saturday, and the army has been stood down.

Police on Tuesday released three men who had been arrested as part of the terror probe, while 11 people remain in custody in Britain.

Abedi’s brother Hashem and father Ramadan have also been arrested in Libya, where authorities say the two brothers were both I.S. jihadists.

Questions are growing over whether intelligence services missed any vital clues, after a report in the Mail on Sunday that U.S. authorities had previously warned Britain’s MI5 intelligence service about Abedi. British police revealed on Tuesday that Abedi had appeared in police records over theft, receiving stolen goods and assault in 2012 but was never flagged up for any radical views.

“He was known to the police for some relatively minor matters,” Manchester police chief Ian Hopkins told BBC radio, adding: “I am not privy to what the security service did or didn’t know about the individual at this time.”

Police released a security camera image of Abedi carrying a large blue suitcase, appealing for any information about where he might have been. “We are just trying to make sure we capture everything that he has discarded so we can then see what the significance is,” police chief Hopkins said. “Has it [the suitcase] got DNA on it of people that may have helped him? Has it material he may have used?”