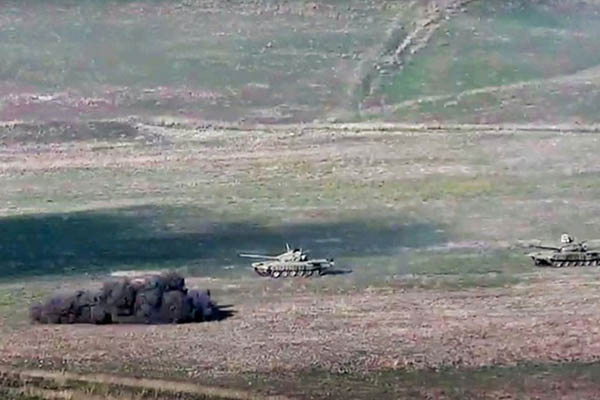 Armenia over the weekend declared martial law and mobilized its armed forces after clashes with Azerbaijani forces reignited over the disputed Nagorno-Karabakh region, resulting in the deaths of at least 24 people.

Armenia has accused neighboring Azerbaijan of carrying out air and artillery attacks on Nagorno-Karabakh, a disputed territory recognized as part of Azerbaijan but controlled by ethnic Armenians. The area in southeastern Europe has experienced conflict for decades between both countries.

Karabakh separatists said one Armenian woman and a child were killed, while Baku said that an Azerbaijani family of five died in shelling launched by Armenian separatists.

Armenia’s Defense Ministry said it downed two Azerbaijani helicopters, with Azerbaijan accusing Armenia’s army of attacking civilians and warning that Armenia is “preparing for a new act of aggression and war.” On Sunday, Armenian Prime Minister Nikol Pashinyan confirmed that martial law has been declared in the country and urged those in the Nagorno-Karabakh region to seek refuge in shelters, Reuters reported.

“I urge the staff attached to the troops to present their territorial military commissions,” Armenian Prime Minister Nikol Pashinyan wrote on Facebook. “For the sake of the homeland, for the sake of victory … Be ready to protect our holy homeland. Proud, winning people,” he added.

As well as the two helicopters, Armenia claims to have shot down three drones, and destroyed three tanks in response to attacks in settlements, including the regional capital of Stepanakert. “Our response will be proportionate, and the military-political leadership of Azerbaijan bears full responsibility for the situation,” the Armenian Defense Ministry said in a statement.

Fighting between Azerbaijan and Armenia threatened to embroil regional players Russia and Turkey, with Armenian Prime Minister Nikol Pashinyan calling on global powers to prevent Ankara’s involvement. “We are on the brink of a full-scale war in the South Caucasus,” Pashinyan warned.

The spokesperson said that Pakistan stands with the brotherly nation of Azerbaijan and supports its right of self-defense, adding its position on Nagorno-Karabakh was in line with U.N. Security Council resolutions.