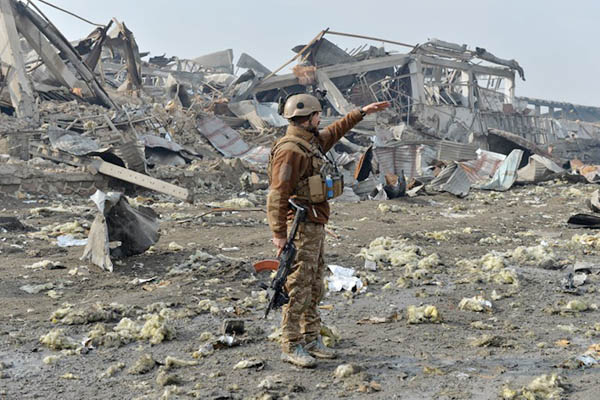 At least 10 killed, 19 wounded in latest attack claimed by the Afghan Taliban

At least 10 people were killed after a massive blast outside a British security company’s compound in Kabul late Wednesday, officials said, with the attack claimed by the Taliban in the latest violence to target the Afghan capital.

The interior ministry and police both said the blast had been a car bomb targeting a compound, which houses G4S, a private British security company, in east Kabul.

“We can confirm that there has been an incident at one of our locations in Kabul. The situation is ongoing and we are coordinating with the Afghan authorities to bring it to a conclusion,” a G4S spokesman said in London.

Afghan authorities also said they were conducting a clearing operation at the site. “10 dead, 19 wounded have been evacuated from site,” said health ministry spokesman Wahid Majroh, without giving the victims’ nationalities.

Interior Ministry deputy spokesman Nasrat Rahimi confirmed the toll but warned it could yet change.

Earlier, sources had said the blast was followed by gunfire. Rahimi said no gunfire had been heard for some time, however.

According to its website, G4S provides security for the U.K. Foreign Office in Kabul. The attack was claimed by the Taliban in a tweet.

It came just hours after Afghan President Ashraf Ghani announced the formation of a team for prospective peace talks with the militant group, as the United Nations renewed calls for direct negotiations between Kabul and the insurgents.

The Afghan government, Western diplomats and U.N. officials have in recent weeks raised hopes of finally reaching a deal to end the 17-year war.

At an international conference on Afghanistan in Geneva, Ghani said the 12-person negotiating team includes both men and women and will be led by his chief of staff Abdul Salam Rahimi.

Wednesday’s assault on G4S is the second high-profile attack claimed by the Taliban on foreigners in as many days.

On Tuesday, three U.S. soldiers were killed in a blast near Ghazni city in central Afghanistan that was also claimed by the militant group.

The attacks follow a wave of bloody violence across the war-torn country in recent weeks that has killed hundreds of people as militants step up their attacks.

Earlier Wednesday, NATO said it was investigating an airstrike in southeastern Afghanistan that might have killed civilians, with unverified reports of women and children among the dead.

On Nov. 20, at least 55 people were killed when a bomber blew himself up in the middle of a banquet hall in one of the deadliest attacks in Afghanistan this year.

The violence comes as the Taliban intensify pressure on Afghan security forces, even as the international community ramps up efforts towards talks. U.S. envoy Zalmay Khalilzad has expressed hopes that a peace deal to end the war could be struck before the Afghan presidential election, scheduled for April. His comments underscore an apparent increasing sense of urgency in the White House and among American diplomats for a peace deal to be done quickly.