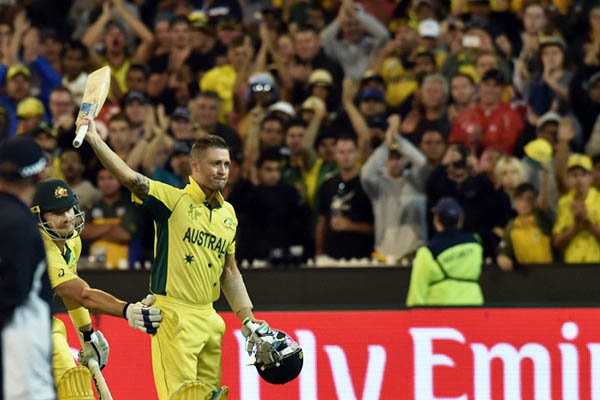 Michael Clarke hit 74 in his last one-day international to lead Australia to their fifth World Cup title with a seven-wicket win over New Zealand in a disappointing final on Sunday.

A record crowd of 93,013 at the Melbourne Cricket Ground saw power-packed Australia bowl out the Black Caps for 183 and then gallop to victory in the 34th over. Clarke, who announced his retirement from the one-day format on the eve of the final, added 112 runs for the third wicket with his likely successor Steve Smith, who returned unbeaten on 56.

The emphatic win was set up by the left-arm fast bowling trio of Mitchell Starc, James Faulkner and Mitchell Johnson who shared eight wickets after the Kiwis elected to bat on a good pitch.

New Zealand messed up their maiden appearance in the title clash of cricket’s showpiece event, falling like nine pins against the hostile Australian bowling. Inspirational captain Brendon McCullum fell off the fifth ball of the innings for a duck and two other frontline batsmen, Corey Anderson and Luke Ronchi, also failed to score. South Africa-born Grant Elliott top-scored with 83, sharing a fourth-wicket stand of 111 with Ross Taylor (40) after New Zealand had been reduced to 39 for three in the 13th over.

The massive crowd, which broke the MCG record of 91,112 on the opening day of the Boxing Day Test against England in 2013, saw New Zealand lose their last seven wickets for 33 runs. New Zealand crumbled after going into the final as the only unbeaten team in the 14-nation tournament, their eight wins including a one-wicket success over Australia in a low scoring pool stage thriller.

Australia’s previous titles came in 1987, 1999, 2003 and 2007 with coach Darren Lehmann, a two-time World Cup winner as a player, celebrating another success off the field.

New Zealand raised hopes of repeating their amazing win in the league when they removed Aaron Finch for a duck in the second over, Trent Boult taking an easy return catch as the ball lobbed off the batsman’s bat and pad. Left-hander David Warner slammed seven boundaries in his 45 off 46 balls, adding 61 for the second wicket with Smith.

But the pugnacious opener was unable to build on his fine start as he pulled seamer Matt Henry down Elliott’s throat at deep square-leg. Smith, who scored a century in the semi-final against India in Sydney last Thursday, continued his good form to help Clarke take charge of the match. Clarke was bowled by Henry when just nine runs remained for victory and was given a standing ovation by teammates and fans as he returned with his bat raised.

Smith sealed victory by pulling Henry for a boundary, sparking jubilant scenes in the stands as Clarke and the rest of the team ran on to the field to embrace Smith.

Starc’s two wickets in the innings took his tally to 22, enabling him to emerge with Boult as the joint highest wicket-takers in the tournament.

Martin Guptill surpassed Sri Lankan Kumar Sangakkara’s 541 runs to become the tournament’s leading run-getter when he reached 10, but he managed to add just five runs more. The tall opener, who hit a World Cup record score of 237 not out against the West Indies in the quarter-finals, was bowled trying to cut Glenn Maxwell’s second delivery.

Taylor and Elliott settled in to build a strong partnership and had taken the total to 150-3 when the batting powerplay began after the 35th over. Both sides fielded unchanged teams from their semi-final wins where Australia beat India and New Zealand downed South Africa in a penultimate-ball thriller.