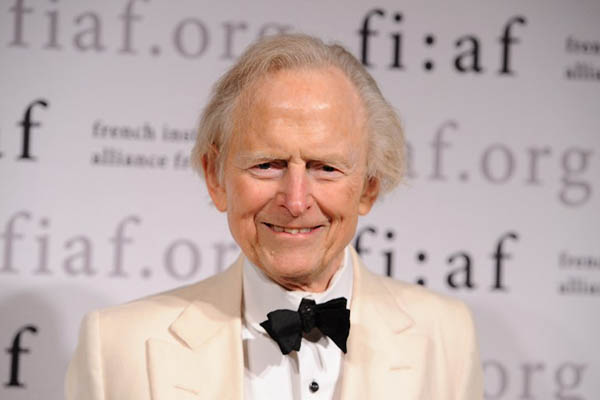 Known for ‘The Right Stuff’ and ‘The Bonfire of the Vanities,’ prolific writer died in a Manhattan hospital

Author Tom Wolfe, the acerbic chronicler of American society known for best-selling books The Right Stuff and The Bonfire of the Vanities, has died at the age of 88.

Wolfe’s agent Lynn Nesbit said the writer died on Monday in a Manhattan hospital, where he was being treated for an infection. “We are incredibly saddened to hear about the passing of Tom Wolfe,” his publisher Picador said. “He was one of the greats and his words will live on forever.”

During a prolific career, Wolfe turned his flamboyant pen and keen eye to pop culture, the hippie movement, the art world, race relations and Wall Street. But he is perhaps best known for his non-fiction bestseller The Right Stuff about the U.S. space program and the original Mercury astronauts.

The 1979 book was made into a Hollywood hit starring Sam Shepard and Ed Harris and made swashbuckling test pilot Chuck Yeager, the first man to break the sound barrier, a household name.

Wolfe is credited with contributing the phrase “the right stuff” and another from the book, “pushing the envelope,” to the American lexicon.

Among those paying tribute to Wolfe on Tuesday was American astronaut Scott Kelly. “He changed my life, and I am grateful I was able to thank him for the wildly unrealistic dream he gave me as an 18 year old boy,” Kelly tweeted. “He was the #RightStuff.”

Wolfe’s first book, The Kandy-Kolored Tangerine-Flake Streamline Baby, published in 1965, was born out of a collection of articles about the 1960s he wrote for Esquire and New York magazines. The book became a bestseller and placed Wolfe alongside other figures in the “New Journalism” movement such as Hunter S. Thompson, Gay Talese, Norman Mailer and Truman Capote.

Instead of keeping a distance from their subjects, “New Journalism” practitioners often adopted an unconventional stylistic approach and perspective.

In interviews over the years, Wolfe would fend off criticism of his liberal use of exclamation points.

Wolfe published two bestsellers in 1968—The Pump House Gang and The Electric Kool-Aid Acid Test, for which he spent time with the “Merry Pranksters,” a band of LSD-taking traveling hippies led by Ken Kesey, author of One Flew Over the Cuckoo’s Nest.

His 1970 book Radical Chic and Mau-Mauing the Flak Catchers, examined racial tensions in the United States and lampooned some of the good intentions of New York liberals in awkward detail.

Wolfe’s 1975 book about the U.S. art world, The Painted Word, outraged many artists with its depiction of an insular village.

Wolfe turned to writing novels in the mid-1980s, penning The Bonfire of the Vanities, a scathing takedown of greed and excess in New York. Like The Right Stuff, the book also contributed a phrase—in this case “master of the universe”—to the American vocabulary.

Bonfire was made into a 1990 film starring Tom Hanks, Melanie Griffith and Bruce Willis. Another novel, A Man in Full, was published in 1998 and also made it to the New York Times bestseller list.

More recently, Wolfe wrote I Am Charlotte Simmons, a 2004 novel about college life, and Back to Blood, a poorly received 2012 book set in Miami.

Thomas Kennerly Wolfe was born on March 2, 1930 in Richmond, Virginia, where his father was the editor of The Southern Planter, an agricultural magazine. After earning his undergraduate degree from Washington and Lee University, Wolfe obtained a PhD in American studies from Yale University.

Wolfe then began a 10-year career as a newspaper reporter. He joined the Springfield Union in 1956 in Massachusetts before going on to work for The Washington Post and the New York Herald Tribune.

In a 1991 interview with The Paris Review, Wolfe described his newspaper experience as invaluable training for his later fiction and non-fiction pursuits. “I wouldn’t give anything for the years I spent on newspapers because it forces you, it immerses you, in so many different sides of life,” he said.

A dapper dresser, Wolfe was known for his trademark white suits, homburg hats and two-tone shoes, a style he would famously self-deprecatingly describe as “neo-pretentious.”

Wolfe married Sheila Berger, the artistic director of Harper’s magazine, in 1978. They had two children.