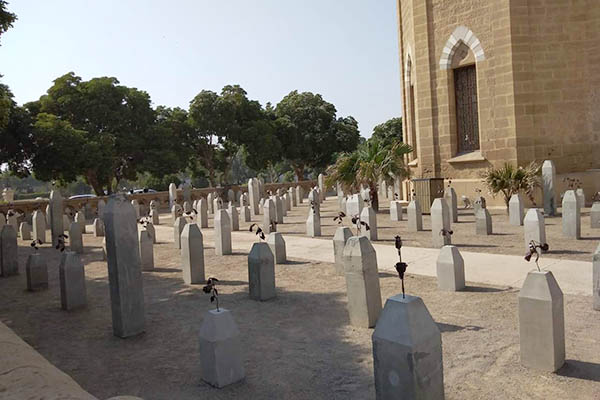 Authorities in Karachi on Sunday allegedly forced the closure of an art exhibition dealing with the touchy topic of “extrajudicial killings,” prompting outrage from activists on social media.

The ‘Killing Fields of Karachi’ exhibition by Adeela Suleman was on display at the Frere Hall as part of the Karachi Biennale. It features symbolic gravestones representing the 444 people allegedly targeted in extrajudicial killings under the supervision of senior police official Rao Anwar. It also has a video component featuring Muhammad Khan, the father of Naqeebullah Mehsud, whose killing in an allegedly fake police encounter provoked nationwide protests last year.

According to local media, Suleman’s exhibition had been on display at Frere Hall as part of the Karachi Biennale, which was organized with the permission and cognizance of the Karachi Metropolitan Corporation. On Sunday, around 10 a.m., two men in civilian clothes took the venue’s administration to task and demanded the exhibition be sealed. Per Suleman, they told the organizers that if the exhibition were not shut down, they would forcibly ensure its closure.

As news of the shutdown started circulating on social media, the ill-considered move of forcing its closure backfired on authorities. While the exhibition would have likely attracted an audience in Karachi, the move to censor it ensured it would spread much further, with social media making it a national concern.

Civil rights activists Jibran Nasir and Karamat Ali, also a founding member of the Pakistan Institute of Labor, Education and Research, organized a press conference at the venue on Sunday evening to denounce the move. “We hoped Anwar would be punished for his crimes, but today’s events clearly show he [Rao Anwar] and others like him are being protected,” Ali told media, adding that such actions by authorities contradicted the government’s claims of projecting a ‘soft’ image of Pakistan and were counter-productive.

As the press conference was wrapping up, authorities appeared to throw further fuel on the fire of outrage against artists’ right to self-expression. A man later identified as Afaq Mirza, the Karachi Metropolitan Corporation’s Director-General (Parks), ran to the podium and started yelling for the crowd to disperse. “This is a public park. You can’t do politics here,” he is seen shouting in video taken by eyewitnesses. When Nasir pointed out that any public location was free-to-use for public affairs, Mirza and he started arguing. Mirza then told media that while it was true that Biennale organizers were permitted to display art, Suleman’s installation was ‘vandalism.’ He added: “They have turned this place into a graveyard. This is not art… they are giving the wrong image of Pakistan.”

Police have clarified to media they were not responsible for the closure; Afaq also told media he did not order the exhibition’s morning shut down, adding Frere Hall was a ‘sensitive’ location and he believed the two men who ordered its closure were from ‘V Corps,’ a field corps of the Pakistan Army assigned in Karachi.

The case at the center of the controversy is that of Naqeebullah Mehsud. He and three other men were shot dead in an alleged police encounter on Jan. 13, 2018. Rao Anwar, who allegedly ordered the police action, was subsequently removed from his post and arraigned in Mehsud’s murder case. Anwar tendered his resignation on Jan. 1, 2019; he is still awaiting trial after being indicted earlier this year.