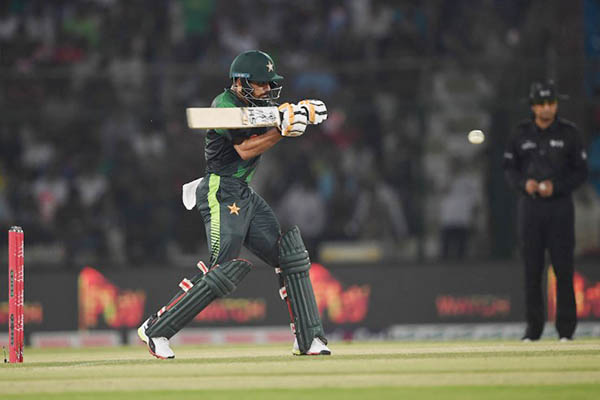 Opener Babar Azam missed a maiden hundred by three runs as Pakistan trounced the West Indies by 82 runs in the second Twenty20 international in Karachi on Monday, taking an unassailable 2-0 lead in the three-match series.

Babar cracked 13 fours and a six in his 58-ball innings, reaching 97 not out to guide Pakistan to their highest-ever T20 total of 205-3 in 20 overs after Sarfraz Ahmed won the toss and decided to bat first at the National Stadium.

Paceman Mohammad Amir took 3-22 as the West Indies were dismissed for 123 in 19.2 overs, faring much better than their 60 all out in the first match which they lost by 143 runs—the second-biggest margin of defeat in T20 internationals.

The third match is on Tuesday, also in Karachi.

The West Indies showed more resistance on Monday as Chadwick Walton hit two sixes and four boundaries during his 29-ball 40 and added 39 for the second wicket with the experienced Marlon Samuels who made 12. But Shadab (2-23) dismissed both in the space of seven runs to check the West Indian chase before Talat mopped up the tail with 2-12.

“I didn’t get the hundred because of my own fault,” said Babar. “The team’s plan for me was to bat out the 20 overs.”

West Indian skipper Jason Mohammed was left to rue another poor show. “It was another disappointing performance,” said Mohammed. “We tried to set aggressive fields to try and get early wickets. It’s difficult at times. Hopefully we can go home with a victory.”

This is Pakistan’s seventh successive T20 series win, all under Sarfraz Ahmed’s captaincy since September 2016.

Earlier, Babar set Pakistan on course for a fourth successive 180-plus total—the first team to achieve the feat in T20s.

The opener put on 119 for the second wicket with Hussain Talat, who notched a 41-ball 63 with eight boundaries and a six.

Pakistan lost opener Fakhar Zaman for six but Babar and Talat batted solidly as the West Indies bowlers struggled again. Asif Ali fell for 14 but Pakistan plundered 61 runs in the last five overs, with Shoaib Malik smashing two boundaries and a six in his seven-ball 17 not out.

Babar failed to reach his century, ending the innings three short of becoming only the second Pakistani batsman after Ahmed Shehzad to score a T20 hundred.

Shehzad achieved the feat against Bangladesh in Dhaka in 2014.