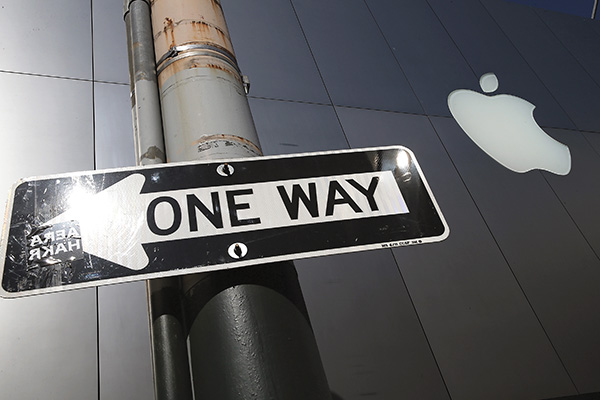 The company may just show us everything wrong with American business.

On April 23, Apple, Inc. unleashed the corporate equivalent of shock and awe on the markets: its quarterly earnings results. The company sold 39 million iPads, earned $9.5 billion, and saw the amount of cash on its books rise to $145 billion, a figure roughly equivalent to the gross domestic product of Belarus. More big numbers: Apple announced that by the end of 2015, it would move some $100 billion in cash off its balance sheet, where it is doing nothing, and onto others’ balance sheets. How? By buying back some $60 billion of its own stock and by increasing its quarterly dividend by 15 percent. Embattled CEO Tim Cook couched the cash blast in positive terms: “We believe so strongly that repurchasing our shares represents an attractive use of our capital.”

This is the sort of action companies take to appease hectoring shareholders when growth is slowing. Thanks to competition, cannibalization, and saturation, in fact, Apple is showing signs of becoming something like a normal company. Apple sold 37.4 million iPhones in the quarter, up a measly 6.5 percent from last year; Mac sales actually fell.

The big challenge facing companies as the bull market and expansion roll into their fourth year is that demand is weak—in the U.S., in Europe, and even in China. Companies have been ingenious about making money amid lethargic growth, and even more shrewd about doing so without sharing their bounty with workers. Corporate profits have soared from $1.1 trillion in 2008 to $1.95 trillion in 2012. As a percentage of gross domestic product, they’ve never been higher. The amount of cash on companies’ books has risen from $1.39 trillion in 2008 to $1.79 trillion in the fourth quarter of 2012—also a record. Meanwhile, U.S. median family income has actually fallen since 2009. And over the past 12 months, average hourly wages rose a scant 1.8 percent. The cartoon image of a CEO shouldn’t be Mr. Burns of The Simpsons. It should be Scrooge McDuck, lounging amid piles of golden coins.

The divergence of wages and profits has been great news for stockholders. But it’s hard for Apple and other firms to keep earnings growing if the pace of sales growth wanes. That’s happening now, in large measure because the workers of the world simply don’t have enough money in their pockets. Here’s an astonishing fact: with $145 billion, Apple has about 8 percent of corporate America’s total cash stash. Yet its stock has fallen nearly 40 percent since last fall, in part on fears of a sales slowdown. Cook & Co. are fighting back by shoveling cash out the door to investors. But returning capital to shareholders is like giving water to people who already have an unlimited supply of champagne, Perrier, and freshly pressed pomegranate juice. It’s stimulus for the 1 percent—hedge funds, mutual funds, individual stock owners, senior Apple employees.

A more radical, disruptive, Apple-like, think-different approach would be for Cook to move some of the cash from his balance sheet onto the balance sheets of people who would spend it on consumer goods—like the 42,600 people who work at relatively low wages at the company’s 402 stores; or the contractors and vendors who run its cafeterias; or the architects who are designing Apple’s futuristic new corporate headquarters; or the armies of low-paid workers at Foxconn factories in China who assemble cheap generic components into expensive Apple-branded products. Lord knows Apple could afford to. The company’s profit margin in the most recent quarter was a stunning 37 percent.

“Wall Street’s obsession with near-term profit is causing great companies like Apple and Walmart to skimp on long-term investment and underpay their employees,” notes Henry Blodget, the former technology stock analyst and current editor of Business Insider (and an Apple shareholder). “This might make some shareholders happy, but, perversely, it hurts the companies and the economy.”

What would happen if Apple simply paid several billion dollars in bonuses to workers tomorrow? Or directed its Chinese contractors to pay a little more and offered to swallow modest price increases? American Apple store workers would take their larger paycheck and hit Walmart, the Olive Garden, the Gap, and buy some apps or songs on iTunes. The workers at Foxconn might spend money on new clothes, or move to apartments, which they would outfit with other consumer goods. A few might even make their way to Shanghai and splurge on an iPhone at the Apple store.

There’s no guarantee that all—or even any—of the money would come back to Apple’s coffers. Next, however, imagine if every company in a similar position would mimic this market leader. If American companies were to deploy just 10 percent of their cash pile into higher wages, it would amount to a stimulus of nearly $200 billion—and that would more than counteract the negative impact of the payroll tax increase. Apple would get more than its fair share of this new demand.

Paying higher wages when you can afford to do so is excellent business karma. What goes around tends to come back around in time. A company whose headquarters address is 1 Infinite Loop should be able to grasp that.