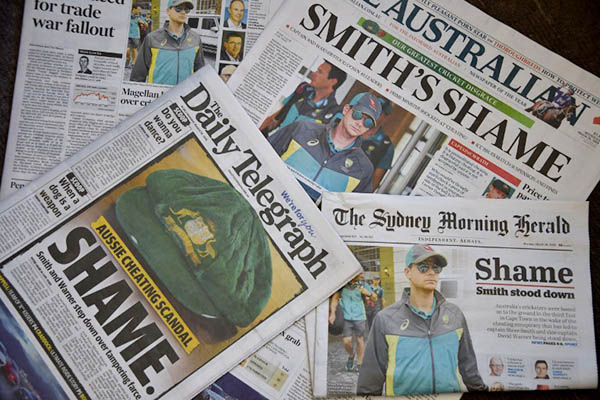 Former captain Michael Clarke said he wishes the ball-tampering scandal engulfing the current Australia side “is a bad dream,” as former cricketers reacted by slamming the players involved.

Batsman Cameron Bancroft and skipper Steve Smith admitted to ball-tampering after the third day of the third Test against South Africa on Saturday, launching cricket into possibly its greatest-ever crisis. “WHAT THE …….. HAVE I JUST WOKEN UP TO. Please tell me this is a bad dream,” tweeted Clarke, who preceded Smith as Australia captain.

Smith admitted that the “leadership group knew about it,” saying they had hatched the plan during the lunch break to “get an advantage.”

Former England captain Nasser Hussain did not mince his words, telling Sky Sports News: “This was a pre-meditated attempt by the Australian team to cheat.” Australian great Shane Warne said whoever told Bancroft to cheat had to be identified. “I feel a bit for Cameron Bancroft because I don’t think he’s taken it upon himself to do something and put it in his pocket,” said former leg-spinner Warne, who took 708 Test wickets. “Who’s told him to do that? It’s important to find out that. I think we’ve got to get to the bottom of why that has happened and what was it. You’ve got to own up. You’ve been caught, you’ve got to own up and say what was it you were hiding. You can’t have that in the game.”

Smith insisted that coach Darren Lehmann wasn’t involved, saying the players had decided to try and change the condition of the ball themselves. “The leadership group knew about it. We spoke about it at lunch. I’m not proud of what happened. It’s not in the spirit of the game,” admitted the world’s No. 1-ranked batsman.

Former England skipper Michael Vaughan said all of the Australian team and coaches would forever be remembered as cheats. “Steve Smith, his Team & ALL the management will have to accept that whatever happens in their careers they will all be known for trying to CHEAT the game,” Vaughan wrote on Twitter.

Ex-England batsman Kevin Pietersen was not convinced that Lehmann knew nothing about the incident. “My 2cents worth – This will be Darren Lehmann’s greatest test as a coach, cos I will struggle to believe that this was all Bancroft’s idea. #SandpaperGate,” he tweeted.

Injured South African fast bowler Dale Steyn agreed, replying to Pietersen: “Bud you know nothing in professional sport is done without the consent of your captain and coach… Tough times ahead.”

South Africa are in total control of the match, leading by 294 runs with five second-innings wickets remaining, in a gripping Test series which is level at 1-1. But the contest, which had its fair share of controversies over the first two matches, will end with the Australians’ reputations shattered, no matter the final score.