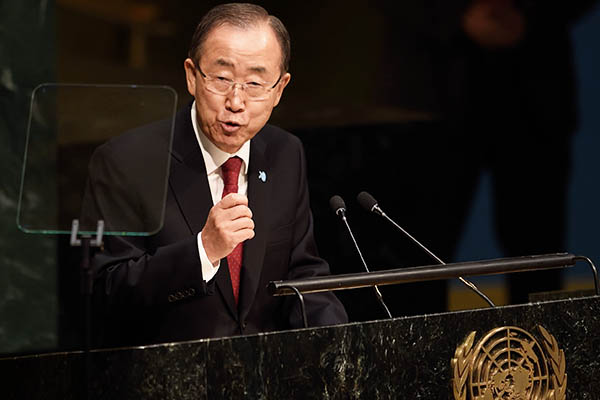 U.N. chief says it is up to leaders of Israel, Palestine to end the decades long conflict.

U.N. Secretary-General Ban Ki-moon said Friday he was “ashamed” at the lack of progress in the Israeli-Palestinian peace process.

“I feel guilty, ashamed of the lack of progress,” he told an event organized by the United Nations Association-U.K. in association with foreign affairs think-tank Chatham House in London. “Basically it’s up to the leadership of Israel and the Palestinians to put an end to the conflict,” he said. “I am not working for a particular country or a particular policy but for the people in the region.”

The peace process has been deadlocked since a U.S. peace mission collapsed in April 2014. U.N. diplomats say Ban is hoping to get peace talks moving again before he steps down as secretary-general at the end of the year.

But last month, Israeli Prime Minister Benjamin Netanyahu accused him of “encouraging terrorism” after the U.N. chief said it was understandable that the Palestinians were resisting Israeli military rule.

Israel seized the West Bank and east Jerusalem in the 1967 Six-Day War and later annexed east Jerusalem in a move never recognized by the international community. Israel occupied the Gaza Strip in the 1967 war and pulled its troops and settlers out in 2005 but still exercises control over most of Gaza’s borders, waters and airspace.

Ban was speaking at Methodist Central Hall, which hosted the first ever meeting of the United Nations General Assembly in 1946.