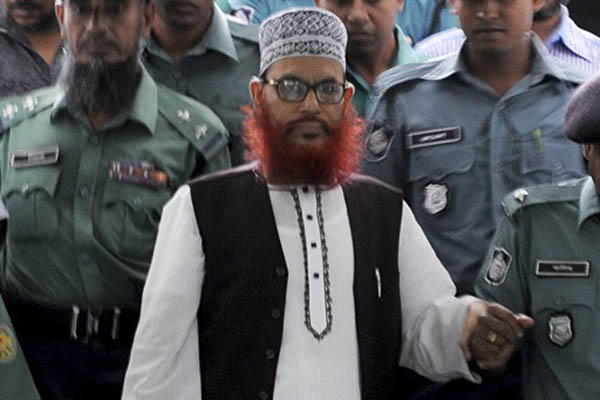 Delwar Hossain Sayedee will now spend the rest of his ‘natural life’ in prison for crimes committed in 1971.

The Bangladesh Supreme Court on Wednesday commuted the death sentence on a top Islamist preacher, triggering clashes between police and secular protesters who slammed the decision as too lenient.

In a surprise ruling, the Supreme Court said 74-year-old Delwar Hossain Sayedee should spend “the rest of his natural life” in jail for crimes during the 1971 war with Pakistan.

Sayedee’s death penalty, passed last year by a war-crimes tribunal, triggered the deadliest political violence in the country’s history, and thousands of police were deployed before Wednesday’s ruling. “We had expected that the court would uphold his death sentence,” said Attorney General Mahbubey Alam, adding he was unhappy with the verdict.

Alam said Sayedee was a notorious war criminal and “torturer of women” who had forcibly converted Hindus to Islam during the nine-month war, which led to the creation of Bangladesh from the former East Pakistan.

Although the ruling was likely to appease hardline Islamists blamed for last year’s deadly clashes, violence erupted on Wednesday between police and hundreds of angry protesters. Police fired tear gas and a water cannon at demonstrators who had converged on Dhaka University. Armed with batons, police tried to disperse the protesters who shouted slogans and hurled stones at officers.

Sayedee was vice-president of the Jamaat-e-Islami, the country’s largest Islamist party, and a popular preacher when he was found guilty in February last year. Many supporters claimed to have seen his face on the moon in a mark of his “saintly” status. His conviction on eight charges of murder, rape and persecution of Hindus sparked riots by tens of thousands of supporters nationwide, leaving more than 100 people dead.

Sayedee’s lawyer said he was dissatisfied with the latest ruling, adding his client should have been acquitted on all charges. “The evidence against him does not warrant conviction or sentencing even for a day,” said lawyer Tajul Islam.

Sayedee is among about a dozen Islamic leaders to have been convicted by the much-criticized war crimes tribunal set up by the secular government to investigate atrocities during the 1971 conflict. The tribunal has been slammed by Islamists who say its trials are more about settling scores than delivering justice.

The Islamists convicted were all accused of being leading members of pro-Pakistani militias who were behind the murder of thousands of people, including some of Bangladesh’s top professors, writers, journalists and doctors.

Last December one of Sayedee’s top colleagues was hanged after his conviction for war crimes.

Sayedee shot to prominence in the 1980s after he started preaching in some of the nation’s top mosques. In his heyday he would draw hundreds of thousands to his sessions, and CDs of his speeches were top sellers. At the time of his conviction, Sayedee claimed the judgment was influenced by “atheists,” and pro-government protesters who wanted to see him dead.

Rights groups say legal procedures at the war crimes tribunal fall short of international standards. The government rejects the accusations, saying the trials are needed to heal the wounds of the war that it claims killed three million people. Independent estimates put the number of deaths between 300,000 and 500,000.