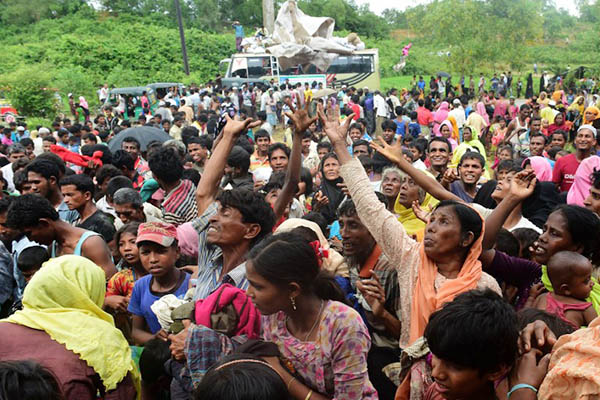 Bangladesh’s foreign minister said on Sunday that genocide was being waged in Myanmar’s violence-racked Rakhine state, triggering an exodus of nearly 300,000 Muslim Rohingya to his country.

Ali met Western and Arab diplomats and the heads of U.N. agencies based in Bangladesh to seek support for a political solution and humanitarian aid for the Rohingya. He told the diplomats that some 300,000 Rohingya had fled to Bangladesh in the past two weeks, taking the total number of such refugees in the country to over 700,000. “It is now a national problem,” Ali said.

At least two diplomats who attended the briefings said the minister told them as many as 3,000 people may have been killed in the latest round of violence. The United Nations says 294,000 bedraggled and exhausted Rohingya refugees have arrived in Bangladesh since attacks by Rohingya militants on Myanmar security forces in Rakhine on Aug. 25 sparked a major military backlash.

Tens of thousands more are believed to be on the move inside Rakhine.

Ali accused Myanmar of running a “malicious propaganda” campaign to term the Rohingya as “illegal migrants from Bangladesh” and the militants as “Bengali terrorists.” He said the Rohingya Muslims in Rakhine are a “mixed group of people” with a history dating back 1,500 years and ancestors included Arab and Indian-origin people.

Ali described actions following the militant attacks on security forces on Aug. 25 as “revenge” by Myanmar troops. “Should all people be killed? Should all villages be burnt? It is not acceptable,” he said, adding Dhaka was seeking a peaceful solution, not a “war” against Myanmar.

“We did not create the problem. Since the problem started in Myanmar, that’s why they should resolve. We have said we’ll help them,” he said, adding that the problem took a “new turn” after the Aug. 25 attacks.

A commission led by former U.N. chief Kofi Annan last month said Myanmar must scrap restrictions on movement and citizenship for its Rohingya minority if it wants to avoid fueling extremism and bring peace to Rakhine state. Ali called on the international community to urge the Myanmar government to immediately implement the recommendations of the commission’s report “in its entirety.”