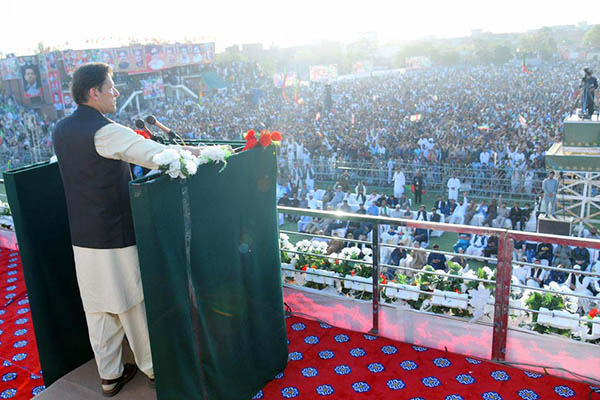 Pakistan’s prime minister says West ‘respects’ leaders who stand up for themselves; claims he did not join politics to learn prices of essential commodities

Defending his criticism of the European Union and its diplomats during public rallies, Prime Minister Imran Khan on Sunday claimed he “knows the West better than everyone else” and “they” do not respect people who “polish their boots.”

Addressing a rally in Hafizabad, part of his efforts to build public support amidst ongoing acrimony with opposition parties over a no-confidence motion against him, he claimed previous leaders had been terrified when dealing with leaders of Western states, such as the U.S. president. “My criticism of the E.U. was justified,” he said, referring to his allegations of them perceiving Pakistan as a vassal state that was bound to adhere to their demands. Referring to Opposition leaders such as Maulana Fazlur Rehman, Shahbaz Sharif, and Bilawal Bhutto-Zardari, he said their criticism of his speeches was based on their vested interests.

“They [foreign leaders] respect nations who stand up for themselves,” he claimed, recalling that he had protested against the U.S.’s drone strikes in Pakistan, adding the attacks had been a “violation of human rights.” He claimed former premier Nawaz Sharif and former president Asif Ali Zardari had never condemned the U.S. for its drone strikes. “I myself protested, staged sit-ins and criticized the West for firing drones in Pakistan,” he said.

“Pakistan wants to keep cordial relations with every country but being the prime minister of 220 million people he cannot compromise on country’s interests,” he said, adding that he had received “must respect” from U.S. President Donald Trump during his visit to Washington because the foreign leader had been “aware of his character and honesty.”

Referring to India and its admission of firing a missile “by accident” into Pakistan, he said Islamabad’s response had been very measured. “Pakistan has all the abilities to protect its boundaries and heading in the right direction,” he said.

No interest in essential commodities

During his address, the prime minister claimed he did not join politics to be aware of the prices of potatoes and tomatoes—two essential commodities that are a staple of the diet of average citizens—but rather to benefit the country’s youth. Reiterating his claims of not needing to enter politics as “he had everything,” he claimed the only way for Pakistan to become a “great nation” was to support the truth and avoid corruption.

Khan claimed that once his government had completed its five-year tenure, it would have provided “unprecedented” development to Punjab province. “This country will break records in terms of development in the next one-and-a-half years,” he claimed, despite all economic experts warning that the country is headed for another perilous situation due to the incumbent government’s policies.

According to the prime minister, his dream has always been to transform Pakistan into a welfare state. “I formed the Rehmatullil Alameen Authority so that every Pakistani child becomes aware of the life and teaching of Islam’s Prophet and stays on the path of the truth,” he said and accused “all previous leaders” of the country of not being aware of the reasons behind Pakistan’s creation.

“Unless the nation stands against evil, it will continue to rise. If we do not stand against oppression, then oppression will increase,” said Khan, whose government recently imposed a controversial law through presidential ordinance seeking to imprison people on the mere allegation of “defamation” on social media portals.

The prime minister also discussed the country’s educational system, and reiterated his claims of the Single National Curriculum ensuring all segments of society would be imparted the same teachings. “We have also introduced 2.6 million merit-based scholarships for the youth of the country,” he claimed.

According to Khan, the PTI-led government would “soon” build two technology universities in the country to boost the nation’s technological innovations and inventions. He also explained his government’s other initiatives, including the provision of health insurance cards to low-income families, setting up of shelter homes, the Kamyab Pakistan program, Ehsaas ration scheme, management of coronavirus pandemic, record tax collection, reduction in petrol and electricity prices and meeting the challenge of climate change. Three of the 10 dams being planned would be ready within the next three years, he claimed.