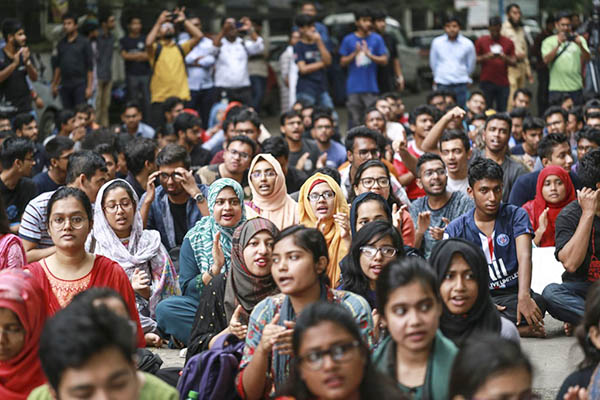 Students in Bangladesh staged a fourth day of protests on Thursday over the killing of an undergraduate as authorities blocked an internet page that detailed alleged torture by activists of the country’s ruling party.

Hundreds of students defied a heavy monsoon storm to stage a rally on the Bangladesh University of Engineering and Technology (BUET) to demand justice for Abrar Fahad.

Fahad was beaten to death on Sunday, sparking a wave of anger in the South Asian nation’s universities. Police carried out two more arrests on Thursday, taking the total detained over the killing to 15—including 11 from the Bangladesh Chhatra League (BCL), the student branch of the ruling Awami League.

The 21-year-old Fahad was allegedly beaten with a cricket bat and other blunt objects for six hours after he put up a Facebook post criticizing Prime Minister Sheikh Hasina. The premier vowed on Wednesday that the killers would get the “highest punishment.”

Internet providers, meanwhile, blocked a webpage launched by a BUET professor that highlighted complaints, including torture, made by students against members of the ruling party’s student wing. An official from an internet service provider said the page had been blocked “following orders” from the government’s Bangladesh Telecommunication Regulatory Commission.

The BTRC, which has in the past had blocked dozens of news portals and websites critical of the government, made no immediate comment.

The Dhaka Tribune newspaper said the webpage contained 177 complaints, with at least 72 posted after Fahad’s killing. Most of the complaints were against the BCL.

Mostofa Akbar, a professor at the university, said the webpage, part of a university internet site, was taken down late on Wednesday. “These complaints were submitted to the BUET student welfare director three months ago,” he told AFP.

Sweden-based Bangladesh rights activist Tasneem Khalil said the blocked webpage “confirmed in graphic detail how such torture has been a routine element in the daily lives of hundreds of BUET students.” He said the database “was posing a serious challenge to the government narrative that the killing of Abrar Fahad was just a stray incident,” Khalil said.