Police Granted Custody of Shahbaz Gill for Another 48 Hours 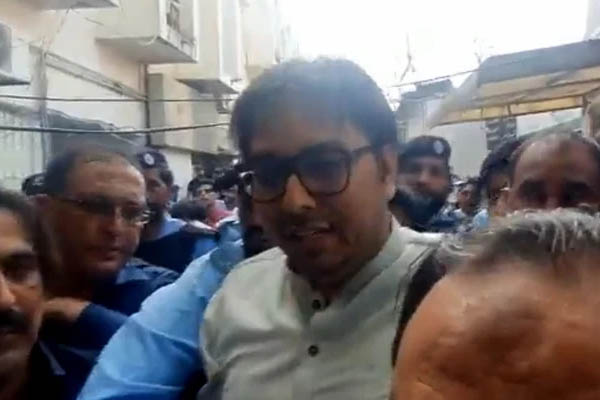 An Islamabad district and sessions court on Wednesday accepted the police’s plea for additional physical remand of Pakistan Tehreek-e-Insaf (PTI) leader Shahbaz Gill, granting 48 hours on a review plea against an earlier ruling that had sent him on judicial remand.

Sessions judge Zeba Chaudhry announced the verdict at 3 p.m. after earlier reserving it following arguments from both the prosecution and defense. The Islamabad High Court (IHC) had, a day earlier, directed the lower court to consider the case on merit after the government challenged the dismissal of Gill’s physical remand by a duty magistrate.

Commencing arguments, Special Prosecutor Rizwan Abbasi said the judicial magistrate had remanded Gill into police custody for just two days but the investigation officer had requested an extension to this. Maintaining that the duty magistrate had rejected the extension without considering all aspects of the case, he questioned why Gill’s statement had been taken as a final statement. He also noted that a 10-day physical remand was granted even in ordinary cases, and two days was insufficient for a case dealing with a “criminal conspiracy.”

During proceedings, Abbasi accused Gill of repeatedly lying to court and said additional remand was necessary for more interrogation and a polygraph test. Referring to claims by the PTI that recovery of Gill’s mobile phone was unnecessary, the prosecutor said this was not the issue. “There are other aspects that need to be investigated,” he said.

Speaking in Gill’s defense, lawyer Salman Safdar reiterated that the case was based on mala fide intent and political revenge—a curious assertion when PTI Chairman Imran Khan has already admitted that his chief of staff should not have given a statement to ARY News that amounted to inciting the public against the armed forces. He also claimed that the case record had not been provided to the defense and questioned why additional remand was necessary. “The case has been based on [Gill’s] selection of words and speech … police have the speech,” he said and questioned how the case could proceed when the federal government had not yet signed off on it—as required for all treason cases. “Gill made some wrong statements … but they don’t come under treason or criminal conspiracy,” he said.

Earlier, speaking to media, PTI leader Chaudhry Fawad Hussain had reiterated allegations of Gill being “tortured” in police custody and demanded a judicial inquiry. Similarly, PTI Secretary General Asad Umar had claimed police were seeking physical remand of Gill to “torture” him some more. He also alleged, contrary to the prosecution, that police had seized Gill’s phone at the time of his arrest.

In a posting on Twitter after the ruling was announced, Fawad described the judges who had sent Gill on remand as “national criminals” and claimed the police custody was just an excuse for more torture.

Gill, who serves as Imran Khan’s chief of staff, was arrested in Islamabad last week after he gave a statement to ARY News that appeared to incite the armed forces to mutiny against their superiors. A treason case was subsequently registered against him at the Kohsar Police Station under several sections of the Pakistan Penal Code, including 124-A (sedition), 131 (abetting mutiny, or attempting to seduce a soldier, sailor or airman from his duty), 153 (wantonly giving provocation with intent to cause riot if rioting be committed; if not committed), 153-A (promoting enmity between different groups, etc), and 505 (statements conducing to public mischief), and 506 (punishment for criminal intimidation).