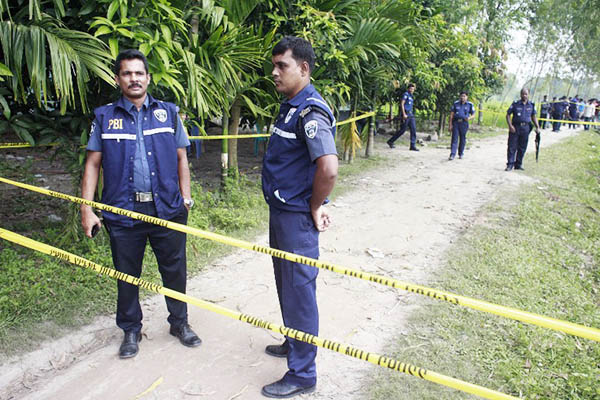 Bangladesh Prime Minister Sheikh Hasina Sunday dismissed the Islamic State group’s claim to have killed two foreigners, saying police still had no evidence to confirm the jihadist group was behind the murders.

Her remarks came a day after 66-year-old Japanese citizen Hoshi Kunio was shot dead in northern Bangladesh, the second foreigner to be murdered in the South Asian nation in less than a week. A 50-year-old Italian, Cesare Tavella, was shot dead last week near Dhaka’s diplomatic zone in another attack claimed by I.S.

“We have still not found any involvement [of I.S.]. We have to investigate,” Hasina told reporters at a press briefing in her office. “We’ve got no clues. If someone claims responsibility, why should we have to accept it?” she said.

The prime minister added groups such as I.S. do not operate in the country, saying “our intelligence agencies are active… we will not allow any such activities in Bangladesh.”

Italian aid worker Tavella was shot three times on Sept. 28 by attackers who fled on a motorcycle—an attack the Bangladeshi government described as an “isolated incident” in an attempt to calm security fears. Kunio was riding in a rickshaw when he was shot dead by three unidentified attackers riding a motorbike in the town of Kaunia in Rangpur district.

Home Minister Asaduzzaman Khan Kamal has rejected any I.S. presence in the country but said the two killings appeared to be linked. “I can again say boldly that there is no existence of I.S. in Bangladesh,” he said on Sunday, adding such murders were “an attempt to create instability in the country.”

Police have launched a formal investigation into three unidentified suspects for the murder of Kunio, without naming a particular group, senior police officer Saifur Rahman told AFP. He said police had also questioned four other people in connection with the inquiry since Saturday as they hunt the key suspects.

Kunio was a frequent visitor to Bangladesh and worked on a farming project in Rangpur. His landlord Jakaria Bala told Bengali daily Prothom Alo that the victim had leased a piece of land in a village near Kaunia town to grow grass for cattle.

Police have stepped up security in the capital’s diplomatic zone with heavily armed officers patrolling key roads and entry points in the wake of the latest murder. “Security has been boosted for both foreign diplomats and foreigners across the country,” said police spokesman Nazrul Islam. “Our intelligence unit is also deployed to provide security to any vulnerable targets,” he said.

The killings have prompted foreign buyers of the country’s $25 billion garment industry to postpone a meeting scheduled on Monday, an official of a trade group said. “The buyers forum, which represents top global retailers, called off the meeting due to security reasons,” said Mahmudur Rahman, vice-president of the Bangladesh Garment Manufacturers and Exporters Association (BGMEA), a group of 5,000 manufacturers. “In addition, some dozens of foreign garment buyers have also postponed their visits in the wake of the murders and the security alerts issued by the embassies,” he added.

Garments account for 80 percent of Bangladesh’s annual exports and are the mainstay of the economy. The country is the world’s second largest textile exporter, after China.

Bangladesh prides itself on being a mainly moderate Muslim country. But the gruesome killings of a series of atheist bloggers this year have rocked the nation and sparked a crackdown on local hardline Islamist groups. After the murder of the Italian, international schools closed temporarily and Western embassies restricted their diplomats’ movements, while Australia’s cricket team cancelled a planned tour due to security concerns.

It would be so interesting to see how much Islam costs or benefits different countries in terms of death rates. Some enterprising economist or epidemiologist needs to take on the mortality of religion. My suspicion is that murders are a small fraction of the deaths caused by religion. Depressing an economy, retarding science, starting wars, interfering with education and other deleterious actions taken by religion have a real impact on death rates that should be looked into directly.

It would be a hard problem but interesting.