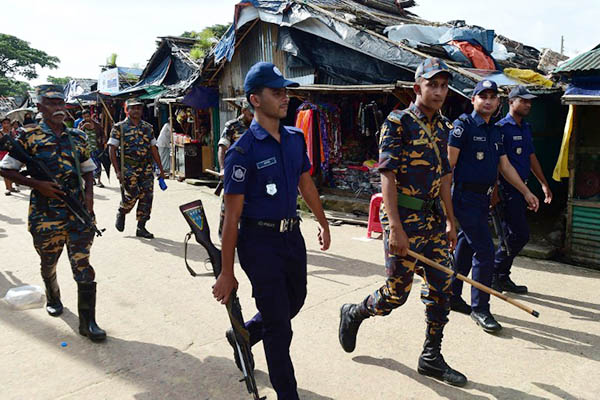 The Bangladesh military said on Thursday it has ordered an investigation after a Rohingya family in a refugee camp accused army troops of raping a 12-year-old girl.

The inquiry comes as around a million Rohingya in vast camps in Bangladesh face increasing hostility two years after fleeing a military offensive in Myanmar.

Mohammad Osman, an elder brother of the alleged victim, said three soldiers entered their shanty at the Nayapara Rohingya camp on Sunday evening and sexually assaulted his sister. “She was raped as one of them tightly held her mouth,” he told AFP by phone, referring to the border district where the refugee camps are located.

A spokesman of the Bangladesh Armed Forces, Lieutenant Colonel Abdullah ibn Zaid, said they were investigating. “We have formed a probe committee to investigate the incident and find out the facts. If [they are] found guilty, exemplary punishment will be given,” he said.

Dr. Shaheen Abdur Rahman said the girl was examined at the central hospital in Cox’s Bazar but he refused to comment on the findings due to court restrictions.

A spokesman of the United Nations High Commissioner for Refugees said they were also investigating the incident. “We are aware of the reports. In such cases, individuals are entitled to medical, physical and psychological support, as well as access to due process,” UNHCR spokesman Joseph Tripura said in a statement to AFP.

U.N. experts have expressed “serious concerns” about the restrictions.

Last week Bangladesh’s home minister said that barbed-wire fencing, guard towers and cameras would be erected around the Rohingya camps, sparking criticism from rights groups. Checkpoints set up on the main highways leading to the camps have stopped Rohingya and sent them back to the settlements when they try to travel to other parts of Bangladesh. Hundreds of Rohingya found elsewhere in the South Asian nation have also been detained and returned to the camps.

Authorities say the internet ban was sparked by security fears after the Rohingya were blamed for the murder of a local politician and drug smuggling.

More than a dozen Rohingya—most accused of involvement in the murder of the politician—have been shot dead by security forces in recent weeks. Officials also said on Thursday that 45 Rohingya have been charged with infiltration after they were detained illegally working in a ship-breaking yard. Rights activists said this could be the first time Rohingya have been charged with infiltration—an offense that carries five years in jail.

THE GANG RAPE CASE OF 12 YEARS OLD ROHINGYA GIRL IS MANIFESTATION OF WEAK MANAGEMENT OF THE WORLD LARGEST REFUGEE CAMP.

The rape incident that happen at 7.30pm (local time) in Nayapara Camp proved the security measures in the refugee camp especially for women and children were very weak. The rape incident raised some critical questions that need to be answered without further delay:

We are thankful to the Bangladesh government for sheltering the Rohingya refugees but we hope more things could be done to ease our vulnerability. We are worried over the cutting of the Internet connection in Cox’s Bazaar as it only exposes the refugees to more abuses and exploitations as well as disrupting the humanitarian aid.

We want to emphasized that the security and the safety of Rohingya refugees especially women and children must be at the centre of the whole management of the refugee camps as it was the main reason why the Rohingya fled their homeland, to save their lives. We regret that the Survivors of Genocide were further victimized in their struggle to seek refuge. We regret the incident happen in the largest United Nations refugee camp in the world.

The Repatriation of Rohingya to Myanmar should not be the centre of discussion when the Myanmar government failed to restore our citizenship. We observed, failed repatriation process have significant consequences on the refugees including increase in human rights violations, corruption, further victimization of refugees as well as increase in Trafficking of Rohingya refugees especially women and children.

It is very clear that actions must be taken immediately to address the security and safety issues in the refugee camps as the refugee lives are at risk. Therefore we demand the following:

1. The UNHCR and the Bangladesh government to immediately conduct thorough investigation into the rape incident with transparency. The perpetrators must be held accountable for the crime committed towards minor Survivors of Genocide
2. The security measures and the SOP in the refugee camps must be reviewed in order to ensure the safety of refugees especially women and children
3. The UNHCR must consider her Resettlement as her safety and her family is at risk
4. The Bangladesh government to restore the Internet connection in Cox’s Bazaar to ensure the humanitarian assistance and the security of the refugees
5. The Bangladesh government to protect the rights and safety of Rohingya women and children as translated in the Convention on the Elimination of All Forms of Discrimination Against Women (CEDAW) which Bangladesh is a Signatory
6. The United Nations to deploy UN Peace Keeping Force to ensure security and safety in the refugee camps
7. The United Nations to take real actions without delay to Stop Genocide in order to stop crimes, exploitations and trafficking against the refugee population