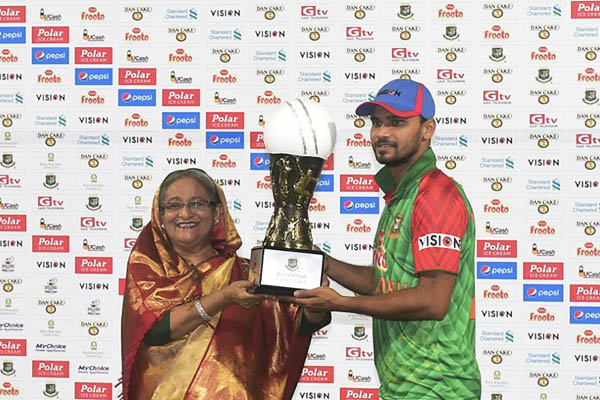 Pakistan has yet to win a single match in any format during its ongoing tour of Bangladesh.

Pakistan’s miserable tour of Bangladesh continued as the hosts recorded their first-ever Twenty20 win over the rivals with a seven-wicket romp in Dhaka on Friday.

Debutant seamer Mustafizur Rahman took two for 20 in four overs as Pakistan, electing to bat after winning the toss, were restricted to 141 for five at the Sher-e-Bangla stadium. Shakib Al Hasan and Sabbir Rahman then plundered unbeaten half-centuries as Bangladesh, cheered from the stands by Prime Minister Sheikh Hasina, surpassed the target in the 17th over.

Al Hasan hit an unbeaten 57 off 41 balls and Rahman made 51 not out to build on their team’s 3-0 whitewash of Pakistan in the preceding one-day series. The pair put on 105 runs for the fourth wicket after Bangladesh appeared to be in a spot of bother at 38 for three in the sixth over.

Bangladesh, who had lost both their previous Twenty20 internationals against Pakistan, turned the tables with a dominant performance.

Mustafizur, the 19-year-old left-armer, showed no signs of nerves as he grabbed the key wickets of skipper Shahid Afridi and senior all-rounder Mohammad Hafeez during a tidy spell. Pakistan’s debutant Mukhtar Ahmed top-scored with 37 off 30 balls and left-hander Haris Sohail made an unbeaten 30, but the tourists struggled to tame the bowling.

Opener Ahmed Shehzad plodded to 17 from 31 balls and Afridi was unlucky to be given out caught behind for 12 when replays showed the ball missing the edge of the bat.

Pakistan were 77 for three in 12.1 overs before Sohail and Hafeez (26) boosted the total by adding 49 for the fourth wicket.

Bangladesh lost three wickets cheaply, including the vital one of Tamin Iqbal, who had hit two consecutive centuries in the one-dayers. But Shakib and Sabbir hammered the Pakistan bowlers to all parts of the ground, signaling out left-arm fast bowler Wahab Riaz, who went for 39 runs in his four overs.

The teams begin a two-Test series from Tuesday.