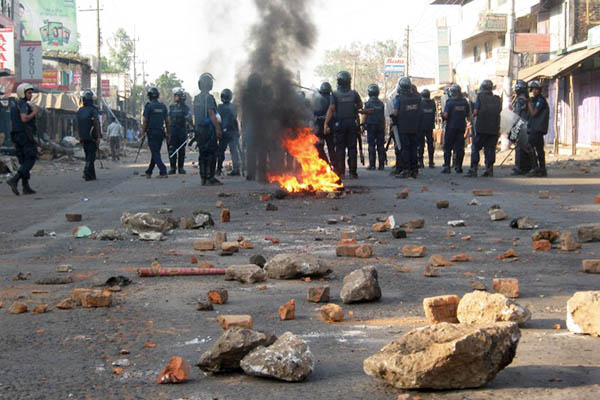 Bangladesh’s main Islamist party was banned from weekend elections and many of its leaders are in custody or face execution, but moves to marginalize the Jamaat-e-Islami will ultimately backfire, analysts say.

After its split from Pakistan in a 1971 independence war, Bangladesh was founded as an officially secular nation and secularism was enshrined in a 2010 constitutional amendment. Although 90 percent of its population is Muslim, radical Islam failed to make much impact in the four decades after independence, the movement’s leading lights tainted by siding with Pakistan during the war.

Jamaat-e-Islami, the only Islamist party to have made electoral inroads, has never seen its support move beyond single digits at elections, although it has been in government on several occasions in coalitions with the center-right Bangladesh Nationalist Party. But analysts and politicians say a decision to bar Jamaat from Sunday’s election and a subsequent crackdown on its leaders, most of whom are in detention or have gone underground, has played into its hands.

“As the government has been using excessive force to crack down on Jamaat over the past year, we have seen them become more powerful, more organized and winning more support,” said Nur Khan Liton, head of Dhaka-based Ain O Salish Kendra rights group. “Instead of using force, the government should have taken them on politically.”

The election, a walkover for the ruling Awami League after it was boycotted by the BNP, was plagued by violence in the build-up and on polling day. A. N. M. Muniruzzaman, head of the Institute of Peace and Security Studies, said Bangladesh was becoming more radicalized. “It is a recipe for the growth of extremism and a conducive playground for non-state actors,” said the retired general. “It’s a bad sign for democratic and major political parties.”

Bangladesh has experienced its deadliest year of political violence since independence, with some of the worst unrest erupting after a tribunal set up by the government began sentencing senior Jamaat figures for crimes committed during the 1971 war. When Abdul Quader Molla was hanged last month for his role in a wartime massacre, thousands of supporters took to the streets and many of the protests turned violent.

There were similar scenes in May after a crackdown on another radical Islamist group, Hefajat-e-Islam, with around 40 people killed in running street battles.

Previously, protests by radical Islamists had rarely attracted much of a crowd and the outpouring of anger took authorities by surprise. Three other Jamaat leaders have been sentenced to death by the war crimes tribunal, a court that lacks international oversight and that Jamaat says is designed to silence it.

A high court ruling to bar Jamaat from the election, which judges said was due to its failure to respect the constitution’s secular nature, was also widely seen as having been government-influenced. Other Islamist movements, such as Egypt’s Muslim Brotherhood, have bounced back from similar bans to win power at elections. But one of Prime Minister Sheikh Hasina’s top advisers said judges had no choice.

“Jamaat wants to create an Islamic, theocratic state based on shariah law,” said Gowher Rizvi. Authorities could not “allow them to undermine the very constitution that the people have set up, allow them to change the very character of the state.”

It is an accusation fiercely rejected by one of the few leading Jamaat members to have evaded arrest during mass pre-election detentions. In an interview at a Dhaka hideout, former lawmaker Syed Abdullah Taher said the party made no secret of its ideology but wanted to convert people “gradually to the cause of Islam” through democratic means. The government says Jamaat bears responsibility for the bulk of the bloodshed in the last 12 months, in particular accusing its supporters of slicing the tendons of rivals with razor blades. Taher says such claims are nonsense and part of a smear campaign.

“We never believe in violence, we never believe in terrorism,” he said. “Our party is very disciplined, we have full control of our party.” Asked about the future of the party, he says it will concentrate on its social welfare programs, which have mushroomed in recent years and drawn in followers in one of Asia’s poorest nations.

If Jamaat does grow in strength, many observers believe the main opposition BNP, which is in an alliance with the Islamists, will see its support decline. While emphasizing the alliance was “an arithmetical electoral arrangement, not an ideological one,” BNP vice chairman Shamsher Chowdhury acknowledged the violent political climate risked radicalizing a country known for its religious moderation. “Any situation which is absolutely unstable and uncertain can be exploited by extremists on the left and right,” he said.