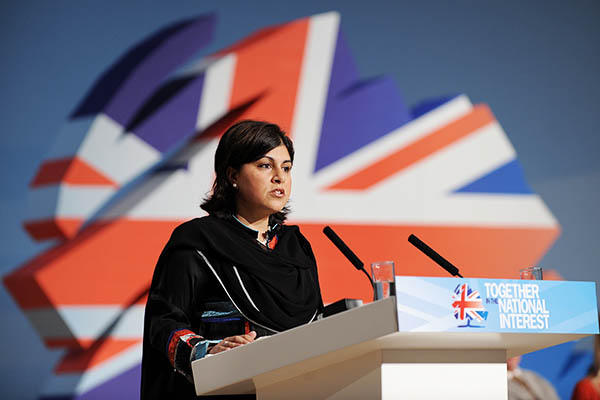 British minister posted a message on Twitter saying she had resigned because she cannot support government policy on Gaza.

A British minister who was the first Muslim woman to sit in the Cabinet has resigned over the British government’s policy on Gaza, she said Tuesday.

Baroness Sayeeda Warsi, a minister at the Foreign Office and minister for faith and communities, wrote on Twitter: “With deep regret I have this morning written to the Prime Minister & tendered my resignation. I can no longer support Govt policy on #Gaza.”

Warsi’s parents were Pakistani immigrants and she was made a member of the House of Lords in 2007. She was appointed to Cameron’s cabinet when his coalition government took power in 2010 and while she initially had a high media profile, her star had dimmed in recent years. She was shuffled out of the full cabinet, the powerful inner circle of government ministers, in 2012.

In her resignation letter, which she also shared on Twitter, Warsi wrote: “Our approach and language during the current crisis in Gaza is morally indefensible, is not in Britain’s national interest, and will have a long term detrimental impact on our reputation internationally and domestically.”

The letter, which is addressed to the prime minister, goes on to say: “I believe our approach in relation to the current conflict is neither consistent with our values, specifically our commitment to the rule of law and our long history of support for international justice.” Warsi also notes that the U.K.’s response to the Gaza crisis, in which over 1,800 Palestinians—a majority of them civilians according to the U.N.—have been killed, could form the basis for radicalization in the years to come.

“I always said that long after life in politics I must be able to live with myself for the decisions I took or the decisions I supported. By staying in government at this time I do not feel I can be sure of that,” states the letter. “It is therefore with regret that I am writing to resign.”

Cameron’s coalition government has drawn criticism, including from the opposition Labour party, for not taking a tougher line against Israel over operations in Gaza. He said on Monday that the U.N. was “right” to condemn the shelling of a U.N. school in Gaza, which killed 10 people on Sunday but declined to say whether he thought it breached international law.

Well done, Sayeeda Warsi. I respect you for taking a stand.

Great lady who has the courage to stand for truth and justice.