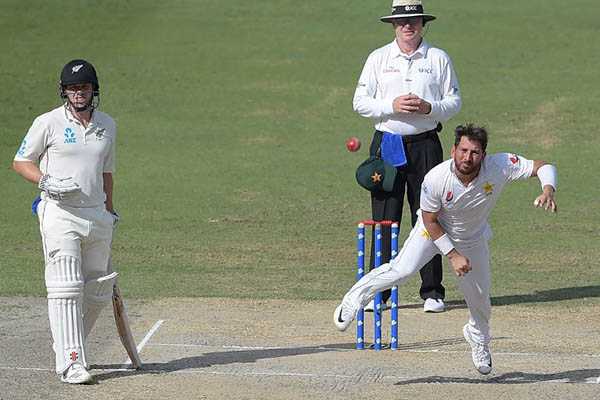 Pakistan’s head coach Mickey Arthur said on Tuesday that Yasir Shah’s 14-wicket haul in the second Test against New Zealand featured some of the best leg-spinning ever seen.

New Zealand—following-on after being dismissed for 90 in the first innings in Dubai—were bowled out for 312 soon after tea on the fourth day.

His figures are the second best match figures in all Tests for Pakistan, behind former captain and current prime minister Imran Khan’s 14-116 against Sri Lanka in Lahore in 1982.

For New Zealand, Ross Taylor top-scored with 82, while Henry Nicholls made 77 and Tom Latham 50.

Arthur said Yasir is a match winner. “We knew he had a big performance inside of him,” said Arthur of Yasir, who now has 195 wickets in 32 Tests. “That first innings, I think there was a spell of about half an hour of the best leg-spin bowling you will ever see. Fourteen wickets in a Test match is superb.”

With his extraordinary performance, Yasir is in sight of breaking Australian leg-spinner Clarrie Grimmett’s 93-year-old record of being fastest to 200 wickets in 36 Tests. “Yasir is very comfortable mentally, and he knows what an important cog he is in our Test line up,” Arthur said. “He got his rhythm going and we felt he was really good.”

The victory squares the series at 1-1, setting up an intriguing third and final Test in Abu Dhabi starting from Monday.

Arthur said his players had worked really hard after the disappointing defeat. “The guys believe in their own ability,” said Arthur, who took over in May 2016. “We discussed exactly what went wrong, worked through that, to maintain that belief, which is so important at this level.”

Arthur backed under-fire skipper Sarfraz Ahmed. “His work ethic is tireless. Him and I work so hard together. I was so disappointed when people were saying there was a rift between Saffy and I, because there has never been anything like that between us.”

New Zealand captain Kane Williamson said Yasir exploited the conditions to the best effect. “He was brilliant,” said Williamson. “I mean some of the deliveries that he bowled to guys facing first or second balls in their innings was very difficult to negotiate.”

“To be able to do that so early on in an innings is a big challenge. So yeah it was one of those performances from Yasir that we know how good he is as a bowler and he exploited the conditions very well.” Williamson hopes his team responds to a more confident Pakistan in the final Test.

“It was a great game in Abu Dhabi and one of our great Test wins. We know how difficult it is to play Pakistan in these conditions and now they will be more confident.”

“Hopefully we can build on some of the confidence we took in the second half of this game.”