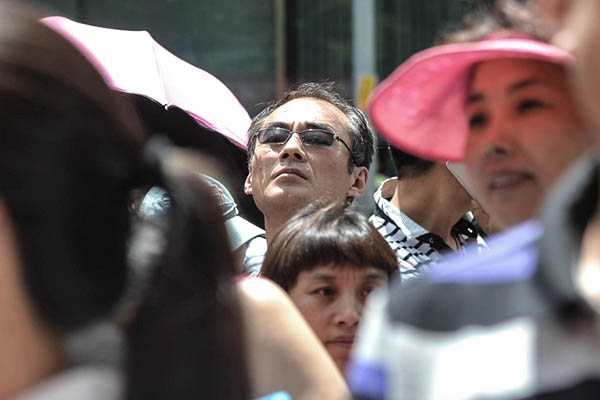 Parent wait for their children outside test centers during the university entrance exams. AFP

University exams in China are being monitored with drones to curb cheating.

Nearly 10 million students will sit the crucially important two-day exam, known as the gaokao—or “high test.” Authorities have become increasingly concerned about the risk of students using devices such as smartphones—some of which have become smaller and easier to hide—as an illicit aid during tests.

Beijing deployed 17,000 police officers to redirect traffic and increase security at the testing sites, and also set up service stations to treat anxious parents should any suffer heart attacks, the city government said in a statement. The exam is the only method used to gain entry to the nation’s universities, which for poorer children can mean the difference between a white-collar office job and a life as a migrant laborer.

Officials in Luoyang, in Henan province purchased a drone designed to search for radio signals that could indicate cheating students, according to Dahe News, the official provincial newspaper. It will monitor signals from 500 meters above the test site, the paper said.

Photos on the website of the government-run China Daily showed radio engineering technicians using computers and scanning devices to search for signals that could be used to transmit answers to students. A college student posing as someone else was caught at one test center, and gave police the names of five other substitute test takers, according to the official Xinhua News Agency.

Security at test centers is extremely tight and in the past some schools have banned any metal from the exam room, leading to a prohibition on metal bra clasps. In past years cheating devices have even been sewn into clothes.