Forces ‘Inimical’ to Pak-China Ties to Blame for Rise in Terrorism: Shehbaz Sharif

In interview, the prime minister says world cannot afford bloc politics and rising tensions between China and the U.S. 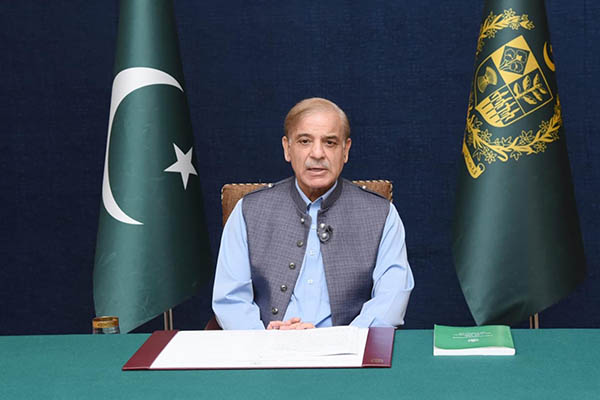 Prime Minister Shehbaz Sharif, in an email interview with Newsweek International marking the one year anniversary of the Taliban taking control of Afghanistan, has blamed forces “inimical” to the Pak-China relationship for a recent surge in terrorism, including attacks on Chinese nationals.

“In the past two decades, Pakistan has suffered tremendous losses in men and material due to its frontline role in the global fight against terrorism,” he told interviewer Tom O’Connor. “It is also no secret that Pakistan has been one of the biggest victims of state-sponsored terrorism that is planned, supported and financed by hostile intelligence agencies,” he said, emphasizing that the ultimate aim of such assaults was to destabilize Pakistan and undermine its economic development. “Capturing of an active duty spy, Kulbhushan Jadhav, from Balochistan, and his subsequent confessions, clearly indicate that a foreign hand is involved in spreading terrorism in Pakistan,” he stressed.

Hailing Pakistan’s security forces for their success against terrorists, he said the forces targeting Chinese citizens in Pakistan were inimical to the Pakistan-China strategic partnership. “Such forces do not wish to see development and prosperity in parts of Pakistan, including in Balochistan,” he said, adding that the Government of Pakistan remained committed to rooting out terrorism.

“Internally, our law enforcement agencies are working closely with the security and intelligence agencies to carry out effective counter-terrorism operations. Investigations continue into recent terrorist attacks, and we are determined to give exemplary punishment to perpetrators and defeat their nefarious designs. We have also taken measures for enhanced safety and security of Chinese personnel, projects and institutions in Pakistan,” he added.

On Afghanistan, Sharif reiterated Pakistan’s stance of the international community remaining engaged with the Afghan Taliban’s interim government in key social and economic areas, and unfreezing Kabul’s financial assets to help build a sustainable economy. “We will continue to impress upon the interim Afghan government the importance of taking demonstrable actions on its commitments including those relating to inclusivity, respect for human rights of all Afghans, including girls’ education, and effective counter-terrorism action,” he said.

To a question on Pakistan’s ties with India and the Kashmir conflict, the prime minister emphasized that Islamabad desired positive ties with all its neighbors. However, he said, India’s unilateral abrogation of Jammu and Kashmir’s special constitutional status on Aug. 5, 2019 were a setback for regional peace. “While India is perpetuating its brutal military occupation of the valley through draconian laws, partisan judiciary and strong-arm tactics, including flagrant use of brute force and attempts to illegally change the demographic structure of the occupied territory, it is also bent on disrupting the stability in the region through its hegemonic ambitions,” he said, stressing that the core issue between India and Pakistan remained the Kashmir dispute and resolving it would enable cooperation.

“Pakistan supports building of an equitable, open and inclusive Asia-Pacific community in the spirit to promote peace, stability and prosperity. Furthermore, we believe that creation of blocs in Asia-Pacific will only incite divisions and confrontations, exacerbate the arms race and lead to instability in the region and beyond,” he said.

Discussing his assumption of the Prime Minister’s Office in April after the ouster of Imran Khan, Sharif emphasized that the change took through a constitutional process and the current ruling coalition represented 70 percent of the electorate based on the votes cast in the 2018 general elections. “The present government is truly national in nature,” he said, adding that it was working on an agenda of economic reform and stabilization. “We are also focusing on making governance efficient and service-oriented, besides improving Pakistan’s relations with friendly countries on the basis of our mutual interests,” he said.

On persisting tensions with Khan’s Pakistan Tehreek-e-Insaf, the prime minister emphasized that as a young democracy, Pakistan needed time to evolve and mature. “[For] democracy to function effectively, the political parties that come to power will have to improve their delivery,” he said, stressing that a political system could only be strengthened if it were owned by the public. “There is also a need for the political parties to agree to the minimum rules of the game in which the welfare of the people remains paramount,” he said, adding all systematic problems could be fixed through engagement and consultations among all political stakeholders.

Discussing Pakistan’s ties with the U.S.—which had deteriorated under the previous PTI-led government—Sharif said the incumbent rulers aimed to build a broad-based and sustainable partnership on the basis of mutual respect and mutual benefit. Noting recent dialogues in the areas of health, energy, climate, investment and trade, he said this would boost bilateral ties, adding the aim was to expand bilateral trade and commercial ties. “Some of the U.S. companies are doing extremely well in Pakistan, and there are growing trade and commercial ties between the two counties, with a lot more potential to achieve,” he said, urging major U.S. companies to invest in Pakistan’s lucrative market and enhance commercial ties, particularly in the I.T. sector.

“The government remains committed to maintaining constructive and sustained engagement with the U.S. with a view to further strengthening and diversifying our relationship for the benefit of our two countries,” he added.

Discussing Pakistan’s longstanding relationship with China and tensions between Beijing and Washington, the prime minister said the world could not afford another era of bloc politics. “We believe that constructive engagement with all countries can promote peace and security as well as development and connectivity in the whole region,” he said, adding conflict anywhere in the world has negative consequences for global peace, security and economy; particularly for developing countries.

“I believe polarization would have serious consequences for the global economy afflicted by the impacts of the COVID-19 pandemic and the Ukraine crisis,” he said, noting developing countries were already suffering from external shocks to their socio-economic well-being. He said Pakistan would be “happy” to play a positive role to bridge the differences between the U.S. and China—as it has in the past—if they so desired. “Pakistan strongly believes that inter-state relations should be based on mutual respect and peaceful resolution of disputes by upholding the principles of the U.N. charter and international law,” he added.

On the ongoing Russian invasion of Ukraine, Sharif stressed that a solution was only possible through diplomacy in accordance with relevant multilateral agreements, international law, and the provisions of the U.N. Charter. “Pakistan believes in an international order based on the fundamental principles of the U.N. Charter: self-determination of peoples, non-use or threat of use of force, respect for sovereignty and territorial integrity of states, and pacific settlement of disputes. It cannot be emphasized enough that settlement of any conflict can only be arrived at through diplomacy and dialogue,” he said. “Pakistan is committed to having friendly relations with all major powers of the world, including Russia,” he added.