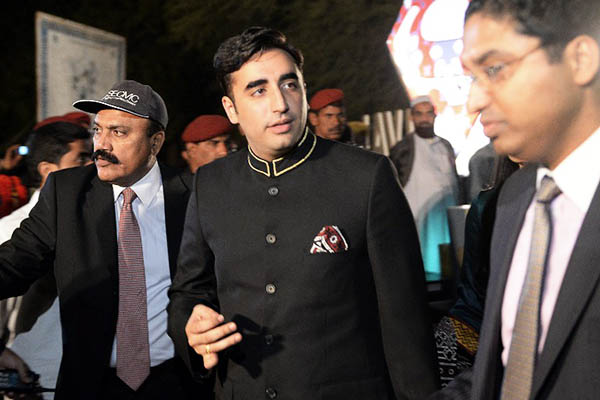 PPP patron-in-chief closes out Sindh Festival by warning the extremists against trying to teach Islam.

Bilawal Bhutto Zardari, the patron-in-chief of the Pakistan Peoples Party, condemned the Taliban on Saturday for trying to drag Pakistan back to a “stone-age era,” as peace talks between the government and militants continued.

Addressing a gathering during the closing ceremony of a two-week cultural festival in his home province of Sindh, Bilawal also urged the country to rise up against militants’ threats. “The Taliban want to impose the law of terror in the country, but I want to tell them, if you have to live in Pakistan you will have to follow its Constitution,” he said. “We don’t accept the law of terrorists,” he added. “Some people are trying to bring back the stone-age era in the country in the name of Islam.”

Landmark peace talks between the government and the Taliban aimed at ending a seven-year insurgency continued into their second week but critics have voiced skepticism as a fresh wave of violent attacks has undermined the discussions.

Bilawal, who has spoken in favor of military action against the Taliban in the past, said he believed the talks were unlikely to bear fruit. The Taliban’s demands include the nationwide imposition of shariah law and an end to U.S. drone strikes, conditions the government and Army are unlikely to be able to meet.

“The terrorists should think of the time when the whole nation will stand against them,” Bilawal said on Saturday in Makli. “We are Muslims and the terrorist groups should not try to teach us Islam.”

Referring to a former peace deal with militants in the Swat Valley in 2008 that resulted in the Taliban taking control of the region, Bilawal said the nation had experimented with peace talks in the past but they had “failed.”

“We tried to negotiate peace with militants in Swat but we failed and we established writ of the state there through a military operation,” he said. “Ask the nation’s daughters what terrorism means, will the nation’s daughters be treated like Malala?” he said, referring to education activist Malala Yousafzai, who survived a Taliban assassination attempt in 2012.

The start of 2014 has seen a surge in militant violence with more than 130 people killed. Negotiators for Pakistan’s government and the Taliban called for a ceasefire after meeting last week in the first round of talks aimed at ending the militants’ bloody seven-year insurgency.

Bilawal’s comments came as about 40 clerics gathered in Lahore on Saturday for a meeting aimed at bolstering the confidence of religious leaders in the peace talks. Maulana Sami-ul-Haq, chief of the Taliban negotiating committee, chaired the meeting. In a joint statement issued after the meeting, the clerics “appealed to both the government and Taliban militants to immediately announce a ceasefire and pursue negotiations to restore peace in Pakistan.”