Blasphemy as a Weapon 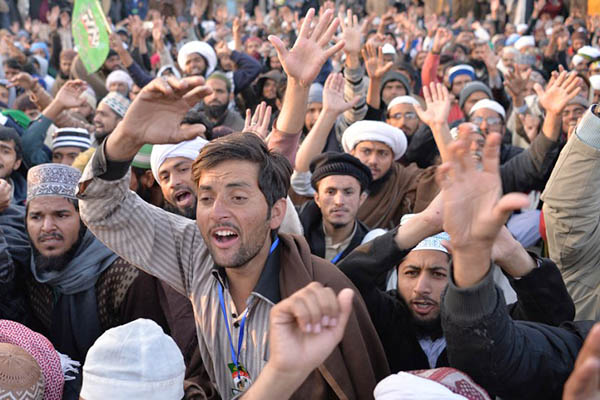 In Pakistan, the controversial law helped the fringe Labaik bring the government to its knees

An obscure Islamist group in Pakistan has brought down a federal minister and dealt the government a stinging blow with the help of a blasphemy law that authorities have long used as a tool of repression against minorities and dissidents.

Law minister Zahid Hamid resigned on Monday, caving to a key demand from Islamist protesters who virtually paralyzed the capital for weeks over a hastily abandoned amendment to the oath sworn by election candidates.

Hamid’s surrender marked a disturbing new precedent in the country’s political landscape, after the fringe Tehreek-i-Labaik Ya Rasool Allah tied the amendment fiasco to blasphemy charges.

Blasphemy is a profoundly sensitive issue in the Islamic republic and can rouse even moderates whose religion emphasizes devotion to Islam’s Prophet. At its most extreme, even unproven allegations have sparked mob lynchings and vigilante murders. But it is also enshrined in the country’s legal code, where it carries the death penalty, with analysts warning the charge is unanswerable.

“You’re looking at a law that can’t be defined… anything can be blasphemy, so it’s very broad,” said lawyer Yasser Latif Hamdani.

Activists have long called for reform, saying the legislation is too often abused to settle personal scores and target the religious minorities.

In recent months some have cautioned it is also becoming a way to stifle digital dissent, with authorities rounding up bloggers and sending out nationwide text messages warning against dubious postings on social media. Now analysts fear Hamid’s capitulation has proven the statutes can serve as an all-powerful political weapon, allowing even a marginal group to deliver a humiliating blow to the country’s rulers.

The amendment at the center of the row altered the oath’s reference to Islam’s Prophet. The government said the change was inadvertent and quickly reversed course but the protesters were not appeased. “The optimist would argue that this could be a one-off. But it isn’t,” said Zeeshan Salahuddin of the Center for Research and Security Studies, a think tank in Islamabad. “This is the net result of four decades of slow poisoning with intolerance, political indifference, and the state’s inability to truly understand the public’s concerns.”

The country’s first blasphemy law was originally passed down from Pakistan’s former colonial masters and largely aimed at keeping the peace between different religious communities on the subcontinent. But the framework was given a shot in the arm during the rule of former hardline Islamist dictator Zia-ul-Haq in the mid-80s. His regime passed a series of new statutes that included a provision for capital punishment in cases of insulting Islam’s Prophet.

“The true tragedy is that the law never actually takes course, as the accused is often publicly lynched or beaten,” explains Salahuddin.

Hamid is not the first politician to face consequences over blasphemy. In 2011, Salmaan Taseer—a liberal governor who called for reformation of the laws—was gunned down by his own bodyguard in broad daylight in the heart of Islamabad.

A lone vigilante killed Taseer, whereas Hamid’s downfall came when the government—already wounded by the ousting of former prime minister Nawaz Sharif earlier in the year over graft claims—was forced to turn to Pakistan’s most powerful institution, the Army, to extricate itself from what had become an explosive situation.

Taseer’s son Shahbaz, himself held captive by the Taliban for five years until he was freed last year, tweeted a viral video on Monday in which Hamid attempted to defend his reverence for Islam’s Prophet. “I understand how scared this man is for his life but I’m so proud to be my father’s son after seeing these cowards,” he wrote.

For decades leaders have forged political alliances and courted religious hardliners on the fringe for electoral support. But analysts have warned the government’s credibility has been eroded by the Labaik victory, leaving a vacuum that could also fuel the rise of right-wing religious parties in elections due in 2018.

“There’s been a generational gestation period for this shift. Political parties are becoming increasingly beholden to right-wing extremist groups with whom they’ve had political alliances,” said Shuja Nawaz, a fellow at the Atlantic Council. “When push comes to shove, people are willing to make deals with them. They make a political ruckus and they get much more leverage than they actually have in Pakistani society at the moment.”

As protesters packed up their belongings on Monday evening, they warned future politicians would face a similar fate to Hamid’s if they crossed the line. “By the grace of God, this incident will serve as a reminder and a lesson for the politicians,” said protester Muhammad Irfan Raza Qadri, 27. “The blood of the martyrs of this protest will further strengthen the finality of Islam’s Prophet and will expose and destroy the anti-Islam politicians.”

Mr.its not controversial its the fact that being Muslim s its our responsibility not to allow this kind of criminal act to change the law.when u r in UK
you people not have any authority to say anything about Queen ,Why ?

Personality worship is nonetheless different to idol worship. Religious tolerance is essential for making a society peaceful. We need to reform school syllabus and children in Pakistan should not be taught indoctrination upto 12 years of age.