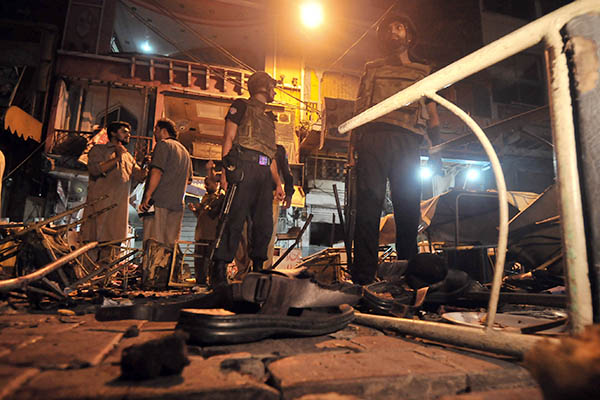 One killed, 13 injured in low-powered blast targeting the Anarkali food street area of the city.

A bomb exploded in a bustling food market in Lahore on Wednesday, killing one person and wounding 13 others, officials said.

Dr. Tahir Bilal said that one dead body and 13 injured have been brought to Lahore’s Mayo Hospital. “Condition of some of those wounded is critical,” Bilal said, adding that one woman was among the injured.

Senior police officer Rai Tahir confirmed the death toll and said the bomb appeared to have been a relatively low-powered device.

TV footage showed broken tables and chairs outside a small restaurant in the Anarkali food street area, where a bombing in July killed five people and wounded 50 others. That attack was the worst bombing in Lahore since a teenage suicide attacker targeted a Shia Muslim religious procession on Jan. 25, 2011, killing at least nine people.

There was no immediate claim of responsibility for the blast.

Thousands of people have been killed in bomb and gun attacks by homegrown Islamist militants in Pakistan in recent years. The violence has largely focused on the country’s northwest, where Taliban and Al Qaeda militants have hideouts in the tribal areas along the Afghan border.

Attacks in Punjab, the most populous province and stronghold of Prime Minister Nawaz Sharif and his ruling Pakistan Muslim League (Nawaz) party, are more unusual.

Rather than waste resources on distributing free Laptops the Sharif’s should try and computerise Nadra, police, immigration Customs and border control data. 13 years of war on terror and it is shameful that there is no list and no knowledge about how where and who these terrorists are!!! IS THIS NOT IGNORANCE BY DESIGN??? WHAT IS GOING ON?? Who is behind these atrocities?? Are Government agencies trying to cover up and protect some foreign power??? Why are the authorities so helpless??? All in all there just does not appear to be the will to stamp terrorism in Pakistan.