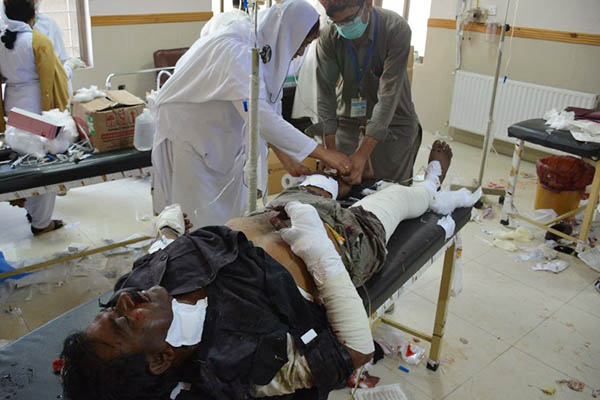 An explosion targeting a police vehicle in Quetta on Friday killed at least 11 people and injured around 20 others, officials said.

The explosion occurred in front of the office of the police chief in Quetta, which is capital of Balochistan province.

“Eleven people have died… and at least 20 others are injured,” Fareed Ahmed, medical superintendent at Civil Hospital told AFP, saying the death toll had increased from five earlier in the morning. Four policemen were among the dead, while three others remain in critical condition, he said.

Police said that their vehicle was targeted in the attack, but that the nature of the explosion was not yet known. “The blast targeted a police pick-up in front of the IG [Inspector General] office. A motorcycle was also destroyed in the explosion,” Mohammed Tariq, a senior police official said.

Pakistan has been battling Islamist and nationalist insurgencies in Balochistan since 2004, with hundreds of soldiers and militants killed in the fighting. Bordering Iran and Afghanistan, it is the largest of Pakistan’s four provinces, but its roughly seven million inhabitants have long complained they do not receive a fair share of its gas and mineral wealth. A greater push towards peace and development by Pakistani authorities has reduced the violence considerably in recent years. The push includes starting work on a massive Chinese infrastructure project—the China-Pakistan Economic Corridor—which gives Beijing a route to the Arabian Sea through Balochistan’s deep sea port of Gwadar.

Beijing is ramping up investment in its South Asian neighbor as part of a plan unveiled in 2015 that will link its far-western Xinjiang region to Gwadar port in Balochistan with a series of infrastructure, power and transport upgrades.