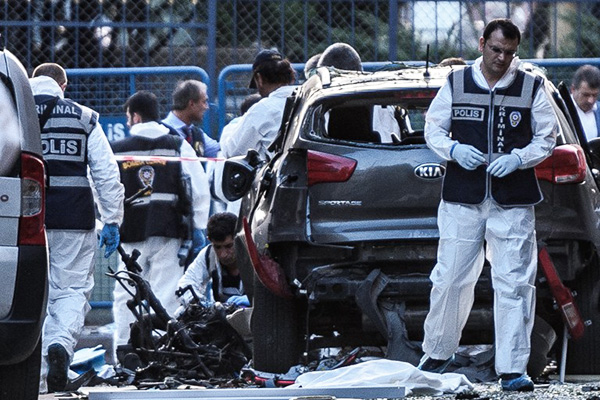 Governor Vasip Sahin says all the injured are civilians, adding suspect fled scene of the crime.

At least 10 people were wounded on Thursday when a bomb concealed in a motorbike exploded near a police station in Istanbul, in the latest attack to strike Turkey’s increasingly tense largest city over the last year.

The explosion rocked the district of Yenibosna on the European side of Istanbul, close to the city’s main Ataturk International Airport. Istanbul governor Vasip Sahin said the attack was caused by a bomb attached to a motorbike by an assailant who reportedly later fled, adding that all the injured were civilians.

With the city hit by attacks blamed both on jihadists and Kurdish militants over the last year, he said work was under way to determine if a militant organization was behind the bombing.

“Work is continuing to find out if it is linked to a group,” he told reporters after visiting the scene. “Camera images are being examined in a detailed way.”

Turkish media reported that police had launched a manhunt for one suspect, wearing a black coat, who fled the scene after the attack. Many ambulances were dispatched to the scene, CNN-Turk television reported. Television pictures showed several cars wrecked and broken glass littering the ground after the blast.

Witnesses told CNN-Turk that they heard a powerful explosion as well as gunshots. Turkish police sealed off the area fearing a possible second blast and Turkey’s broadcast watchdog slapped a ban on images of the bombing.

The force of the blast blew out the windows of the police station. “It was a serious trauma. I cannot describe in words,” one witness Metin Alev told CNN-Turk, who was a few dozen meters from the scene. “There’s dust everywhere.”

Turkey has suffered a bloody year of militant attacks in its two biggest cities, leaving dozens of people dead and putting the country on a high security alert.

Kurdish militants have twice struck in Ankara in deadly attacks, while suspected Islamic State suicide bombers have hit Istanbul on three occasions. In June, 47 people were killed in a triple suicide bombing and gun attack at Istanbul’s Ataturk airport, with authorities pointing the finger at I.S.

Fifty-seven people, 34 of them children, were killed in August in a suicide attack carried out by a bomber linked to I.S. jihadists at a Kurdish wedding in the southeastern city of Gaziantep.

The country is also still reeling from a failed July 15 coup blamed on the U.S.-based Islamic preacher Fethullah Gulen that has been followed by a relentless purge of his supporters from all state institutions.

The strike is the first bombing attack that has been reported in Istanbul since the failed coup. The same police station at Yenibosna came under an attack in 2012 blamed on the far-left Revolutionary People’s Liberation Front.

There was no immediate indication who could be behind the latest blast.

The Turkish military has stepped up operations against Kurdish militants after the rupture in 2015 of a fragile ceasefire and there has been a dramatic surge in violence that so far shows no sign of ending.

The outlawed Kurdistan Workers’ Party (PKK), designated as a terror group by Turkey and its Western allies, generally concentrates its attacks in the southeast of the country. However its activists have on occasion carried out small-scale attacks in Istanbul. A splinter group of the PKK, the Kurdistan Freedom Falcons (TAK), claimed a June car bombing in the center of Istanbul that killed seven police and four civilians.