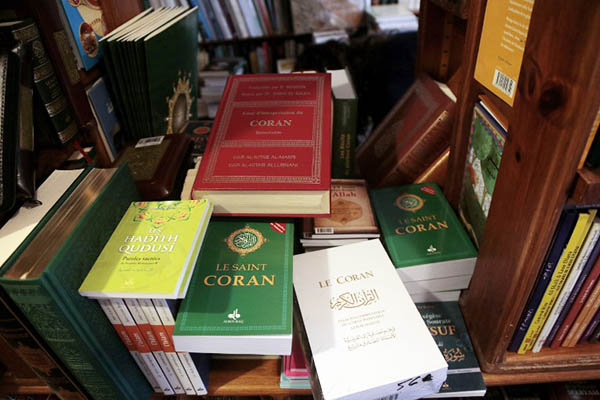 French booksellers say their customers want to personally judge whether or not Islamic State represents the religion’s reality.

Books on Islam are selling out in France after deadly extremist attacks in the capital raised uncomfortable questions about Europe’s fastest-growing religion.

A special magazine supplement focused on the Quran has flown off the shelves, and shops are selling more books on Islam than ever after the Paris attacks in January that left 17 dead. “The French are asking more and more questions, and they feel less satisfied than ever by the answers they’re getting from the media,” said Fabrice Gerschel, director of Philosophie magazine, which published the supplement.

Sales of books on Islam were three times higher in the first quarter of 2015 than this time last year, according to the French National Union of Bookshops. Mathilde Mahieux, of La Procure chain of bookshops that specializes in religion, said people want a better understanding of the religion that the brutal Islamic State (I.S.) group claims to represent, so that they can make up their own minds.

The jihadist attacks against the Charlie Hebdo satirical magazine and a Jewish supermarket have left many non-Muslims looking for answers. “A very Catholic lady came to buy a copy of the Quran, because she wanted to understand for herself whether or not [Islam] is a violent religion,” said Yvon Gilabert, who runs a bookshop in Nantes, western France.

Others want to see past extremist interpretations of Islam. “I think we have to know how to see past the fundamentalism, in order to see what religions have to offer,” said Patrice Besnard, a regular at a Paris bookshop specializing in religions.

French academics too are becoming more curious, with a chair in the study of the Quran inaugurated on Thursday at the prestigious College de France in Paris. Jean Rony, who teaches law at the nearby Sorbonne university, began studying the Muslim holy book for himself this year.

“Given the situation, I have added sessions on monotheistic religions to my general culture class for students preparing for magistrate exams,” he said.

Mansour Mansour, who runs the Al Bouraq publishing house specializing on Islam and the Middle East, said his sales have shot up by 30 percent. “The same happened after the September 11 attacks in 2001,” he told AFP. Now the spike is likely to last longer “because Islam will continue to pose a geo-political problem,” Mansour sighed.

Part of the interest in France appears to stem from the fact that many of the extremists committing horrific abuses in Islam’s name in Syria and Iraq are of Western origin. Enraged by the jihadists’ interpretation of the Quran, Mansour said his company has withdrawn several books that offered “too literal” an interpretation of Islam from his catalogue.

He warned about people diving into reading the Quran “unaccompanied” and jumping to conclusions on its highly poetic text. Instead he recommends that the uninitiated start by reading a biography of Islam’s Prophet.

Claude Brenti, of the Catholic publisher Beatitudes, said he has noticed a change in attitudes among scholars. “In certain Muslim circles there was a refusal to critically analyze the text, but now I see some thinkers are changing,” he said.

With the I.S.’s brutality creating shockwaves since its emergence in 2013, publishers like Mansour were already selling more books on Islam even before the Paris attacks. Twice as many books published in France last year were dedicated to Islam than to Christianity, according to the publishing weekly, Hebdo Livres.

And at France’s largest book fair in March the biggest seller for Le Cerf imprint, which is run by the Catholic Dominican order, was A Christian Reads The Quran, a reprint of a book first published with much less fanfare in 1984.

It was far from the only hot title dealing with Islam at the fair, with the U.S. publisher Columbia University Press snapping up the rights to The Silent Quran, the Talking Quran by Mohammad Ali Amir-Moezzi, as well as the paperback launch of rapper Abd al Malik’s bestseller May Allah Bless France.

Even the publisher of the year’s big non-fiction hit, The French Suicide, whose controversial author Eric Zemmour has been accused of Islamophobia and stirring up anti-immigrant feeling, made a strong play at the fair of its new translation of the Quran as well as a Plea for Fraternity by the Muslim philosopher Abdennour Bidar.