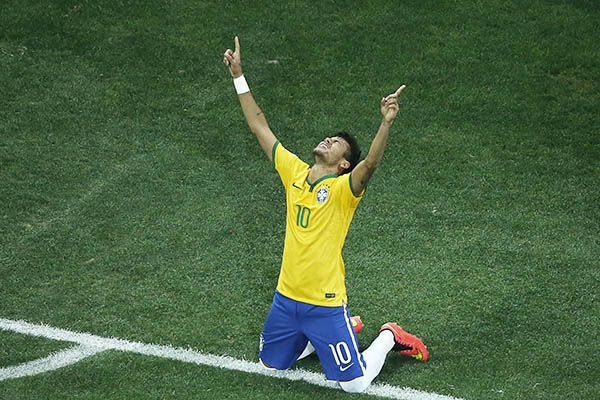 Brazil launched the World Cup with an emotion-fueled 3-1 victory over Croatia on Thursday as an opening day, which began with violent clashes, gave way to an outpouring of joyful celebrations.

Barcelona superstar Neymar scored in each half as Brazil recovered from conceding an early Marcelo own goal to set up a win before hordes of golden-shirted fans at the 61,600 Corinthians Arena in Sao Paulo. Chelsea midfielder Oscar put the seal on the win with a late strike from distance to trigger delirium.

The host nation’s Group A victory was greeted by an explosion of fireworks across Sao Paulo, a sharp contrast to several hours earlier when riot police fired tear gas and stun grenades to disperse angry protests. But a largely free-flowing tournament-opener was shrouded in controversy, with Brazil’s second coming courtesy of a dubious penalty when Croatia defender Dejan Lovren was harshly adjudged to have shoved Fred over.

The hosts, chasing a record sixth World Cup, had also enjoyed a degree of good fortune in the first half when Neymar received only a yellow card for elbowing Croatia’s playmaker Luka Modric. Moments later Neymar scored Brazil’s equalizer to settle home nerves after Marcelo’s 11th-minute own goal. Lovren was furious with the performance of Japanese referee Yuichi Nishimura, branding his display a “scandal.”

“Two billion people I think saw that it was not a penalty. I didn’t touch him,” Lovren said. “It wasn’t a mistake, it was a scandal.”

Pop superstars Jennifer Lopez and Pitbull headlined a lavish opening ceremony, which included the appearance of a paraplegic wearing a robotic bodysuit controlled by brain signals who performed a ceremonial kick-off.

The match began after a hearty rendition of Brazil’s national anthem with fans—exhorted to unite behind the team by coach Luiz Felipe Scolari—roaring their support for the “Selecao.”

Even after the music stopped, fans and players belted out one more verse.

Brazil captain Thiago Silva epitomized the mood, bellowing a rallying cry to his teammates as they embarked on their quest to earn a first title on home soil. The victory provided a euphoric counterpoint to scenes earlier in the day when violent protests in Sao Paulo had threatened a stormy start to the month-long football extravaganza.

It had been a torrid seven-year build-up bedeviled by delays and public anger at the tournament’s $11 billion cost, and scattered protests took place on Thursday in several of the cities that will host World Cup games. The worst violence took place just a few kilometers from the opening match, as anarchist demonstrators in black shirts and masks lit bonfires of rubbish after armored police sought to quell protests.

But Sao Paulo and other cities largely went quiet as the game started. Yellow and green flags hung from many buildings.

After the victory some fans expressed hope Brazil could rally behind the team’s campaign. “This joy will be a contagion that will spread to all Brazilians,” said Jonathan de Jesus Silva, 21, a nursing student. “This happiness will help bring a better climate.”

Protesters, who last year brought chaos to the Confederations Cup rehearsal tournament, had vowed to march on the Sao Paulo stadium. But riot police responded forcefully, chasing protesters up a main avenue and firing tear gas in the middle of oncoming traffic, forcing cars decorated with the Brazilian flag to weave their way through the chaos.

A canister fired by police hit and injured a CNN journalist and an AFP correspondent saw one woman in tears clutching her arm.

In Rio de Janeiro, striking ground staff briefly blocked a road leading to the city’s international airport. Around 1,000 protesters also gathered in the city center, a small group of them scuffling with police, who arrested four people.

A total of 64 games will culminate with the July 13 final in Rio de Janeiro’s Maracana Stadium next month. Friday’s action promises more drama, with world champions Spain facing the Netherlands in a repeat of the 2010 World Cup final in the northern city of Salvador in Group B. Group B’s other encounter sees dark horses Chile take on Australia. In the day’s other remaining game, Mexico play Cameroon in Group A.