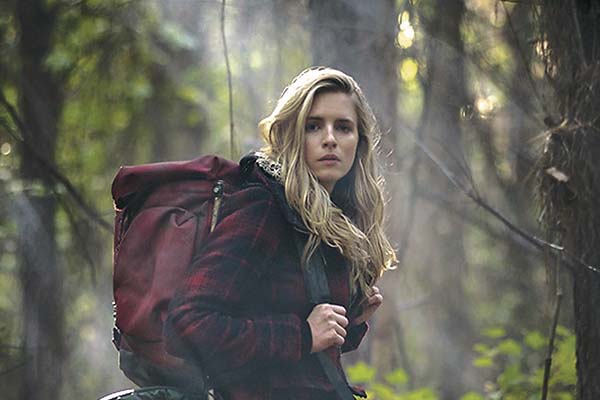 Within minutes of speaking with Brit Marling, you realize she isn’t like most young actresses. Sure, she’s pretty—stunning, actually. She has a breezy aplomb, à la Emma Stone or Jennifer Lawrence, which makes you think, I’d totally grab beers with her.

The 29-year-old actress graduated from Georgetown University with an economics degree back in 2005, but turned down a job offer from Goldman Sachs after a summer internship in favor of trying to make a go of it in the film industry. Her big breakthrough came during the 2011 Sundance Film Festival, when two movies she co-wrote and starred in premiered—the sci-fi drama Another Earth, directed by her Georgetown pal Mike Cahill, and another college friend Zal Batmanglij’s Sound of My Voice, about a mysterious cult.

Now Marling has reunited with Batmanglij for the thriller The East. In the film, which she also co-wrote, she plays Sarah Moss, an operative working for a private intelligence firm who’s tasked with infiltrating an eco-anarchist collective known as The East. The group, led by Benji (Alexander Skarsgard) and Izzy (Ellen Page), executes covert attacks—or “jams”—on eco-unfriendly corporations, e.g., flooding a Big Oil CEO’s vacation home with crude. The more time she spends with the group, however, the more she finds herself adopting its point of view.

What was your first filmmaking job when you moved to Los Angeles in 2005?

Mike, Zal, and I all spent some time working on docu-reality shows or documentaries. I had made this documentary with Mike, Boxers and Ballerinas, and learned how to shoot and edit. It was much easier to get a job doing those things, and it didn’t involve a compromise of morality the way that playing a vapid, thinly written character in some bad films did.

You’ve managed to stay away from the “thinly written” roles for young women in Hollywood by writing roles for yourself.

I think that there are starting to be more and more great roles written for women, but it’s also incredibly competitive. There aren’t as many parts as there are wildly talented young actresses, so it’s a good thing to keep writing for myself, as well as parts for all the other great women out there.

And you spent two months in 2009 with Zal practicing “freeganism,” which involves eating other people’s trash in the “total boycott of an economic system where the profit has eclipsed ethical considerations,” according to Freegan.info.

We were young, hungry, and broke, and wanted to learn more about these ideas. We spent the summer traveling—train hopping cross-country, living on organic farms—and fell in with anarchist collectives and freegan groups. We were changed by that experience. I think the activism of our generation is a kind of activism in how you live your life on a day-to-day basis, and there was something incredibly brave about that. It’s a hard thing to actually live your political ideals. It was years later, after we made Another Earth and Sound of My Voice, that we realized we couldn’t shake the experience and wrote about it.

Did you draw from your real-life experiences with the anarchist collectives for The East?

The spin-the-bottle scene came from something we did while on the road with the anarchist collectives. At first everyone’s a little embarrassed, and then you start doing it and it gets profound really fast. People feel afraid to open up and ask each other things, and then they do. We are so afraid to be intimate and vulnerable and real with each other. We prefer to tweet and Instagram and keep everything at arm’s length instead of just, “Let’s kiss.”

Why did you decide to have your eco-anarchist collective target multinational corporations and the pharma industry in the movie?

In the past, anarchy was about rebelling against governments because governments were the seat of power, but the new seat of power is definitely the corporation. Money is power, and the corporations have the money and the corporations are dictating policy. I think everybody can agree on one thing, which is that they’re frustrated by the lack of accountability. This idea that the banks are too big to jail or to fail; or that BP dumps all this oil off the coast of New Orleans and nothing of consequence really happens to them—everybody agrees that that’s foul, so The East becomes a little bit of wish fulfillment. Everybody is getting a secret pleasure out of the idea that they’re smuggling oil into the Hamptons estate of the CEO of a Big Oil company and dumping it in his pool.

You mentioned living one’s political ideals. Was that one reason you decided to walk away from your job with Goldman Sachs and veer off from the financial path you were on?

In the West, there’s this idea that what you do for a living is separate from who you are. But I think that the more you do something, the more it becomes who you are. There are a lot of people in finance who have made a lot of money and then taken that fortune and, using the same business mind that led them to acquire that fortune, applied it to attempting to do good. I respect that path, but I just didn’t know how to do it. I wasn’t happy. Don’t you have to hold yourself accountable for what your corporation does and how it’s acting in the world? And day to day, I wasn’t happy. I would go to work every day and was waiting until the clock reached an hour it was permissible to leave. Why was I going to be selling the hours of my life for that when time is your most valuable asset? It’s limited, you don’t know how limited it is, and it’s of immeasurable value. So I peaced out.