Britain to Have First Female P.M. Since Thatcher 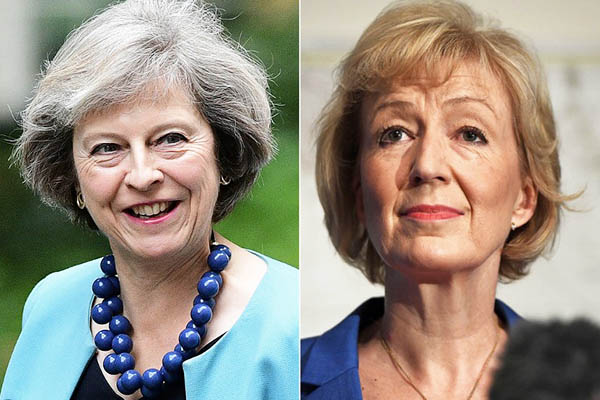 Theresa May, Andrea Leadsom on shortlist of candidates for U.K.’s premiership.

Britain will have its first female prime minister since Margaret Thatcher after Theresa May and Andrea Leadsom made the shortlist on Thursday to be the leader who will guide the country out of the E.U.

“Who’ll be the new Maggie?” asked the front page of the Daily Mail newspaper after cabinet veteran May won 199 votes from the 329 ruling Conservative lawmakers who took part in the ballot for next party leader and prime minister. Junior energy minister Leadsom, who was only elected to parliament in 2010 and is a virtual unknown to the wider British public, got 84 votes.

The new prime minister will be announced on Sept. 9 and will immediately have the task of extricating Britain from its 43-year E.U. membership following the seismic vote in last month’s referendum after a bitterly divisive campaign.

May enjoys higher support among lawmakers, but the vote will now be decided by the Conservative Party’s 150,000 ordinary members, who may want a leader who supported Britain leaving the European Union.

“We need proven leadership to negotiate the best deals for leaving the European Union,” said May, who was a low-key figure on the ‘Remain’ side, outside the parliament after the announcement. “This vote shows that the Conservative Party can come together and under my leadership it will,” she said.

Leadsom, who rose to prominence in the campaign to leave the E.U. and has argued for a rapid exit, played down the economic downsides of leaving the 28-member bloc. “I believe we have a great future ahead of us,” Leadsom said in a speech in London to a room packed with supporters. “We need to unite. We need to be positive.”

Leadsom has received the endorsement of UKIP’s Nigel Farage and Johnson, who was the favorite to succeed Cameron until last week. “Important the next Prime Minister is a Brexiteer – she has my backing,” wrote Farage on Twitter, after announcing on Monday that he was stepping down as the leader of the U.K. Independence Party.

May has said she has no plans to invoke Article 50—the formal procedure for leaving the E.U.—before the end of the year, while Leadsom has said she wants to do so as quickly as possible.

E.U. leaders have warned against dragging out the process, a point pressed by Christine Lagarde, managing director of the International Monetary Fund (IMF), in an interview with AFP in Washington. “The key word about this Brexit affair is uncertainty and the longer the uncertainty, the higher the risk,” she said. “The sooner they can resolve their timeline and the terms of their departure the better for all. It needs to be predictable as soon as possible.”

Some Conservative M.P.s agree—about 30 have signed a letter organized by former party chairman Grant Shapps calling for a new leader to be installed by the end of July.

The shock result of the June 23 referendum prompted Cameron to resign and sent global stock markets and the value of the pound plunging. London’s FTSE 100 index has recovered but the Bank of England warned this week that the feared risks to financial stability were starting to materialize.

Lagarde said Brexit was a “major downside risk” to the world but played down the likelihood of a global recession, saying: “The immediate effects will be on the U.K.”

May, who has run the Home Office since 2010, is a well-known national figure known for talking tough on immigration. Leadsom, who has never served in the cabinet, secured a surprise boost in support following a sound performance in E.U. referendum debates.

In a speech in London to a room packed with supporters, Leadsom said her focus would be on “the continued success of the U.K. economy.”

“Prosperity should be our goal, not austerity,” the 53-year-old said. She dismissed predictions that Brexit could spell economic disaster, and said the fall in the pound to a 31-year low against the dollar was good for exports.

In a round of television interviews, she dismissed reports that she had exaggerated her experience in the financial sector before becoming an M.P. in 2010.