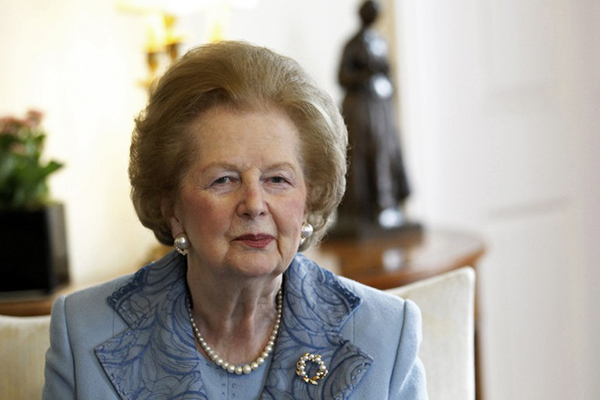 Margaret Thatcher, the former British prime minister known as the “Iron Lady” and who shaped a generation of British politics, died on Monday. She was 87.

“It is with great sadness that Mark and Carol Thatcher announced that their mother Baroness Thatcher died peacefully following a stroke this morning,” Thatcher’s spokesman, Lord Tim Bell, said referring to Thatcher’s children.

Britain’s Queen Elizabeth II was saddened to hear of her death, said Buckingham Palace. “The Queen was sad to hear the news of the death of Baroness Thatcher. Her Majesty will be sending a private message of sympathy to the family,” it said.

The former premier, who led Britain from 1979 to 1990, suffered from dementia and had appeared rarely in public in recent years. She was last in hospital in December for a minor operation to remove a growth from her bladder. The former Conservative Party leader remains the only female premier in British history and was the 20th century’s longest continuous occupant of 10 Downing Street. She led the Tories to three election wins.

Her daughter once revealed that the former premier had to be repeatedly reminded that her husband Denis had died in 2003. She was told by doctors to quit public speaking a decade ago after a series of minor strokes.

Michael Howard, Tory leader from 2003 to 2005, told Sky News television: “It’s terribly sad news. She was a titan in British politics. I believe she saved the country, she transformed our economy and I believe she will go down in history as one of our very greatest prime ministers.”

Right-wingers hailed her as having hauled Britain out of the economic doldrums, but the left accused her of dismantling traditional industry, claiming her reforms helped unpick the fabric of society.

On the world stage, she built a close, “special relationship” with U.S. President Ronald Reagan, which helped bring the curtain down on the Soviet Union. She also fiercely opposed closer ties with Europe.

Pakistan’s former president Pervez Musharraf took to Facebook to express his thoughts on Thatcher. “It is with great sadness I have learned of the passing of the former British prime minister,” he wrote. “She led her nation with strength and courage, and as I think of her many contributions, I am reminded of her quote ‘Disciplining yourself to do what you know is right and important, although difficult, is the high road to pride, self-esteem, and personal satisfaction.’ May her soul rest in peace.”

Last year, Thatcher was the subject of a Hollywood movie, The Iron Lady. Meryl Streep won an Oscar for her portrayal of the British politician.