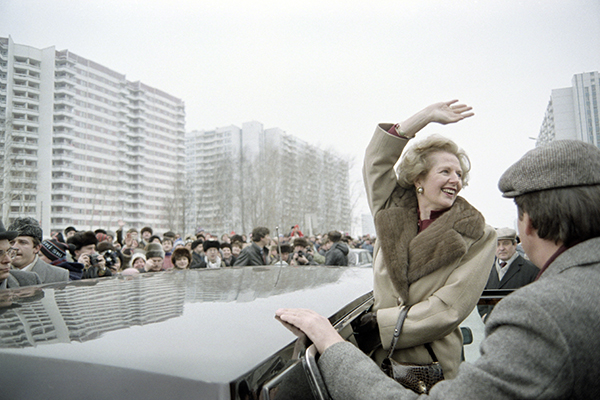 Mikhail Gorbachev, Helmut Kohl, and Bill Clinton were among those who joined in paying tribute to the late British prime minister Baroness Margaret Thatcher, who died of a stroke on Monday in London at age 87.

The “Iron Lady” was a polarizing figure in Britain and beyond, but foreign leaders on Monday were unanimous in acknowledging her place in 20th-century history and her fearlessness and fierce determination.

U.S. President Barack Obama called Thatcher a “true friend of America,” while former president Bill Clinton hailed her as an “iconic stateswoman” who lived a “remarkable life as she broke barriers, defied expectations, and led her country.” Nancy Reagan, a former first lady of the United States, said “Ronnie and Margaret were political soul mates, committed to freedom, and resolved to end communism.”

Among her contemporaries, former Soviet leader Gorbachev, who held frequent meetings with Thatcher in the 1980s as the Cold War drew to a close, said she would be well remembered for her commitment and resolve. “Margaret Thatcher was a great politician and a bright individual. She will go down in our memory and in history,” said the Nobel Peace Prize winner.

Fellow Cold War hero Lech Walesa, the Polish dockyard worker whose pro-democracy Solidarity movement helped create the first cracks in the Soviet system in the 1980s, said Thatcher “contributed to the fall of communism in Poland and Eastern Europe.”

In Brussels, European Commission head Jose Manuel Barroso paid tribute to Thatcher’s “contributions” to the growth of the European Union, despite her deep skepticism over increasing ties with Europe.

Kohl, the former German chancellor considered the father of Germany’s 1990 reunification, said he “greatly valued Margaret Thatcher for her love of freedom, her incomparable openness, honesty and straightforwardness.”

Pope Francis said he recalled “with appreciation the Christian values which underpinned her commitment to public service and to the promotion of freedom among the family of nations.”

Malaysia’s Prime Minister Najib Razak called her “a formidable figure on the world stage,” adding that she inspired many with “her strong leadership and sense of conviction.”

Australia’s Prime Minister Julia Gillard hailed Thatcher for helping to shatter the glass ceiling for women in politics. “Her service as the first female prime minister of the United Kingdom was a history-making achievement,” Gillard said in a statement.

South Korea’s first woman president, Park Geun-hye—an avowed admirer of Thatcher—praised how she “revived the British economy and led Britain to an era of hope in the 1980s.”

Pakistan’s former president Pervez Musharraf took to Facebook to express his thoughts on Thatcher. “It is with great sadness I have learned of the passing of the former British prime minister,” he wrote. “She led her nation with strength and courage, and as I think of her many contributions, I am reminded of her quote ‘Disciplining yourself to do what you know is right and important, although difficult, is the high road to pride, self-esteem, and personal satisfaction.’ May her soul rest in peace.”

Flowers from admirers began piling up outside her London home soon after her death was announced, but left-wingers quickly began planning jubilant parties, proving that the late premier was as divisive in death as she was in life.

In Glasgow and in the edgy south London neighborhood of Brixton, enemies of the late premier held small street parties to celebrate her death, with some holding placards saying “Rejoice—Thatcher is dead.”

Britain’s coalminers were among the fiercest of her foes—and for one senior mining official marking his birthday on Monday, her death was the icing on his cake. “I’m having a drink to it right now,” said David Hopper of the National Union of Mineworkers. Thatcher’s government crushed a year-long miners’ strike in 1985 and forced them to accept sweeping pit closures, in one of the bitterest episodes in British industrial history.

Bitter reactions were also heard in Argentina where Thatcher is remembered as the British leader who launched the 1982 war over the disputed Falkland Islands. “God bless the day that that terrible woman has died,” said veteran Domenico Gruscomagno, 71. “She was an odious person. In order to win elections in Great Britain, she waged war.”

While right-wingers have credited Thatcher with having hauled Britain out of the economic doldrums, the left accuses her of dismantling traditional industry and claim her reforms helped unpick the fabric of society. Gerry Adams, leader of the Sinn Fein republican party, said she had played a “shameful role” in the Troubles in Northern Ireland.

But on Monday most reaction to her death—at least from leaders abroad—was positive. Even those with reason to remember the often divisive figure less fondly were quick to pay tribute to her huge personality.

In South Africa, the ruling African National Congress recalled the differences between Thatcher and those fighting against apartheid in the 1980s. Thatcher famously argued that the ANC was a “terrorist” organization. “She failed to acknowledge the ANC as the rightful party of governance, but was out of touch with the British people on that issue. It’s water under the bridge,” said ANC spokesman Keith Khoza, while conceding she was “a leader of note.”