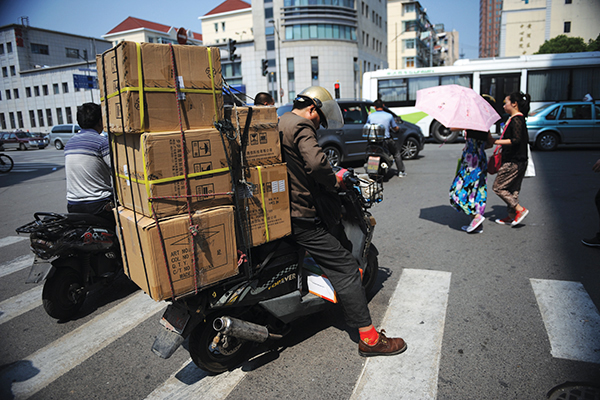 The latest export from China may be … slower growth. China has long been like a giant sports car, hurtling forward at a breakneck pace. Its astonishing growth record has propelled it to become the world’s second-largest economy, behind only the U.S. But now China is trying to shift gears on the fly, aiming to rely less on fickle demand for exports from austerity-gripped developed countries and more on domestic demand and services.

While there’s no danger of a stall, several indicators point to a slowdown. After years of growth at 8 percent or above, the government now says the economy grew at a 7.7 percent annual rate in the first quarter of 2013. By China’s recent standards, that’s pokey. Two weeks ago, China reported industrial output grew 9.3 percent in April from the year before—a similarly disappointing result after years of double-digit gains.

And these figures may be overstating the reality. China’s economic bureaucracy won’t win any awards for transparency: when China claimed exports grew 14.7 percent in April, analysts stifled a laugh and the government ultimately conceded that sales to two of its biggest customers—the U.S. and the euro zone—fell 0.1 percent and 6.4 percent, respectively. But they said that weakness was apparently more than overcome by an incredible 57 percent rise in the amount of exports to Hong Kong. Analysts, however, believe that huge increase has more to do with Chinese businesspeople creating paper trails to mask the movement of currency than with goods reaching customers. On May 1, the privately conducted Purchasing Managers’ Index showed that new export orders fell in three of the first four months of 2013.

While markets wait for confirmation of the trend, some outside policymakers aren’t. Australia has prospered in the past two decades as a huge supplier of coal, iron ore, grains to China. On May 7, the Australian central bank took analysts by surprise when it cut the nation’s benchmark interest rate from 3 percent to 2.75 percent—a gesture largely seen as a preemptive move against further weakness in China. Traders had better learn the Mandarin word for “slowdown.”