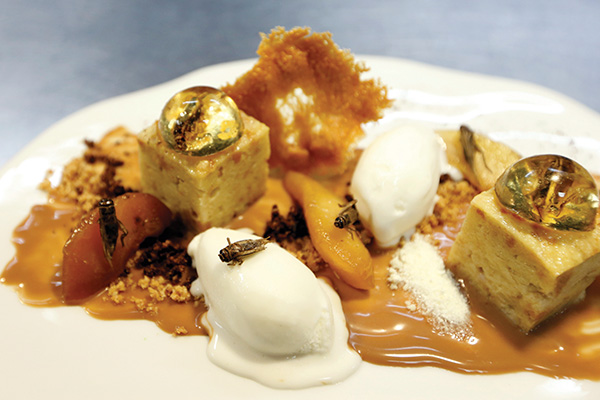 Good for you. Good for the Earth. Good to eat?

Would you eat a bug to save the world? What if it looked like a burger? A 150-page report by the U.N.’s Food and Agriculture Organization makes the case that if we’re going to feed the world’s growing population, bugs need to be on the menu. To start with, insects are highly nutritious; many have as much protein per gram as beef and as much omega-3 fatty acids as fish, plus a bunch of vitamins and fiber. Then there’s the fact that raising bugs is far easier on the environment than raising mammals: crickets don’t need acres of pasture, nor do they belch methane or create mountains of manure—all factors that add to livestock’s 18 percent share of greenhouse-gas emissions.

Of course the argument against eating bugs is also quite compelling: they’re gross.

But that’s a question of cultural conditioning, and pro-bug-eating entomologists, chefs, and environmental activists are looking for ways to change our palates. David George Gordon, author of The Eat-a-Bug Cookbook, likes to begin cooking demonstrations by asking his audience how many people in the room ate something that fell out of the butt of a chicken that morning.

Gordon thinks insects will make the leap, but when they do, they probably won’t look like the tempura-fried tarantula in his cookbook. “The idea of eating a whole anything is weird,” he says. “People say, ‘I can’t eat this. It’s looking back at me.’ ” Instead, he points to the work of researchers at Wageningen University in the Netherlands, who hope to purée mealworms into burgers and sausages. Copenhagen’s Nordic Food Lab is working along similar lines with its bee-larvae-based granola and yogurt. (They describe the flavor as something like egg and honey with a hint of honeydew melon.) The most elegant bug offering to date comes from the Royal College of Art and Imperial College London, where a team of postgraduate students created the “ento box,” a sleek bento-style container of insect-protein cubes. It looks a lot like sushi, which even a few decades ago was still regarded warily in the West. With the right packaging, maybe bugs could follow a similar path.