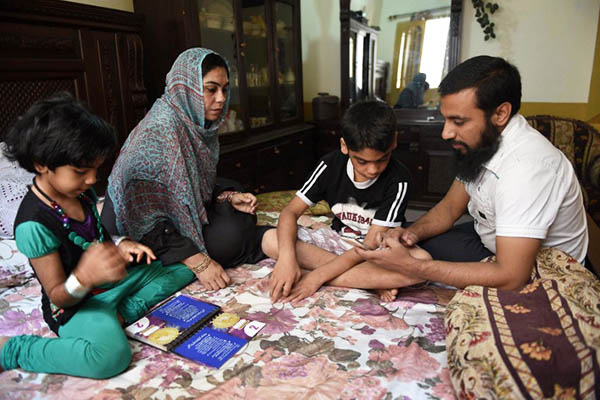 Saima Tanveer, a teacher, betrays little emotion as she recounts her family’s terrifying dash through war-torn Aden, dodging bullets and shells to reach the port and flee Yemen on a Chinese naval vessel.

The 35-year-old was among around 170 Pakistanis who escaped the country on April 3, along with her accountant husband and two disabled children.

Pakistan has evacuated hundreds of its citizens from Yemen since a military coalition led by Saudi Arabia began bombing rebels last month to try to restore exiled President Abedrabbo Mansour Hadi to power.

Tanveer’s two happy years in Yemen, teaching at a Pakistani-run school in the southern city of Aden, came to a sudden end on March 23 when Houthi Shia rebels descended on the city.

Now back in Peshawar, Tanveer described with remarkable composure her desperate race through Aden to reach the Chinese ship that took them to Djibouti to fly home. For more than a week they had been forced to wait as gunfire and explosions rattled around them, changing their location every night, never knowing whether the next shell would have their names on it.

Finally the ship arrived, but reaching it from the hotel where Tanveer and other Pakistanis were hiding out meant a gut-wrenching half-hour drive through a city where street battles were raging between rebels and militias loyal to President Hadi.

“Our administration gave us five to 10 minutes that we have to move to Moalla [Aden’s port district] because at five o’clock they will start heavy bombing,” said Tanveer. “That was too horrible a journey for us. We moved from the airport area, there was too much shelling at that time—two bullets hit our car, tanks were moving. They were firing, but we had to save our lives.”

The Chinese ship took the evacuees to Djibouti where a special Pakistan International Airlines flight returned them to a joyful reception in Islamabad on April 3.

Before the Houthi Shia rebels hit the city and shattered the calm of their lives, Tanveer used to take her son and daughter on evening walks along Aden’s seafront. But when the rebels came and Hadi escaped to neighboring Saudi Arabia, Tanveer and her colleagues were forced to close their school and flee.

“It was continuous shelling, continuous firing and the tanks moving on the roads. It was quite frightening for us,” she said.

Tanveer had lived through bombings in Peshawar, which has borne the brunt of Pakistan’s bloody struggles with Islamist militants. But she said Yemen’s complex tangle of tribal, sectarian and political factions was as bewildering as it was frightening.

At least 736 people have already been killed in the turmoil gripping Yemen and fears are growing of a humanitarian disaster in the impoverished state as the violence intensifies. “In Pakistan we recognize this is our Army, this is our police, but there we can’t recognize who is Houthis and who is government—there are so many other groups which are involved now,” she said.

Tanveer and her family lived with 20 or so other Pakistanis in a shared compound. After the rebels reached Yemen, she said locals warned them they might be attacked for being foreigners.

“They said to us: ‘If someone knocks at the door, don’t allow your male persons to go outside. Maybe they will shoot your men, but being a female they may give you some sympathy’,” she said.

Soon after the Saudi coalition began its air raids, Pakistan, which has rebuffed Riyadh’s request to send troops to Yemen, began evacuating its citizens. But a first flight from Hodeida, on the Red Sea, proved impossible for Tanveer to reach. Islamabad tried to send a second to the port of Mukalla, closer to Aden but a jihadi stronghold.

Tanveer, who had earlier worked in Mukalla, said a friend there warned her: “She was saying they are cutting heads [off]… people are saying that Al Qaeda is working there.” It is not clear whether any beheadings actually took place in Mukalla.

Eventually rescue came in the form of the Chinese warship. Despite her ordeal, Tanveer said she hoped to one day to return to Yemen.

“We want peace and security there. If there will be [peace], we are ready to work again for Yemen because there are very good people there,” she said.