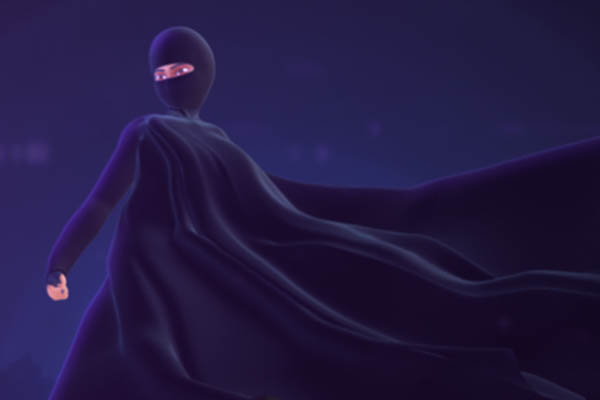 A new cartoon superhero disguised in a flowing black burka is set to debut on Pakistani television next month in an animated series that follows her battle for girls’ education in Pakistan.

The Urdu-language show charts the adventures of Burka Avenger, a mild-mannered teacher who uses her superpowers to fight local gangsters trying to close down the girls’ school where she works.

While set in the fictional town of Halwapur, the world of Burka Avenger will resonate in Pakistan where Taliban militants have prevented thousands of girls from going to school in the country’s northwest and attacked activists campaigning for girls’ education.

In what’s billed as an action-comedy Burka Avenger, helped along by three schoolchildren, uses pens and books as projectile weapons to ward off the evil Baba Bandook and his henchmen.

Aaron Haroon Rashid, one of Pakistan’s biggest pop stars, conceived the series as a medium through which to emphasize the importance of girls’ education.

Throughout Pakistan, nearly half of all children and nearly three quarters of young girls are not enrolled in primary school, according to U.N. and government statistics published late last year.

Last October a Taliban gunman shot teenager Malala Yousafzai in the head for campaigning for the right of girls to go to school in her home town in Swat Valley, northwest Pakistan. Yousafzai survived the attack and earlier this month delivered a powerful speech at the U.N. in New York in which she vowed not to be silenced by terrorists.

The animation will be broadcast by private Geo television network from Sunday, the official Facebook page of Burka Avenger said.

“I have been working with my team at Unicorn Black for one year on this amazing TV series. The Burka Avenger iPhone game and music album is coming soon,” Rashid said on his Facebook account.