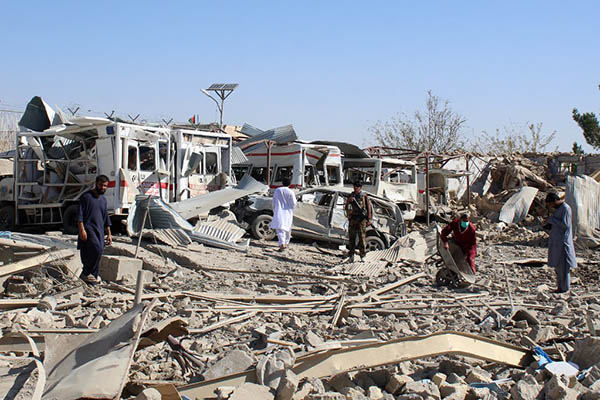 At least 10 killed, another 90 injured after explosion targeting an intelligence services building

The Taliban killed at least 10 people and wounded 90 others on Thursday after a car bomb targeting an intelligence services building exploded and destroyed a nearby hospital in the southern Afghan city of Qalat, the governor of Zabul province told AFP.

The blast in Zabul was just the latest in a string of deadly Taliban bombings across Afghanistan this week as violence intensifies after U.S. President Donald Trump abruptly ended talks with the insurgents over an American withdrawal from the country.

“This morning a car bomb targeted the NDS [National Directorate of Security] in Qalat of Zabul. The regional hospital of Zabul was also located there and has been destroyed,” said governor Rahmatullah Yarmal.

Atta Jan Haqbayan, the head of Zabul’s provincial council, gave a higher death toll, saying 20 people had been killed in the attack and another 90 wounded.

The bombing was later claimed by a Taliban spokesman, Qari Yousuf Ahmadi, who said the attack was against the National Directorate of Security and had killed intelligence officers. Residents near the blast said the explosion rattled homes and shattered windows and was followed by gunfire around 6 am local time.

“It was horrific,” said university student Atif Baloch, who saw women and children being dragged away from the scene by rescuers. “I cannot remember a deadly attack like this in my area.”

Panic also spread among residents searching for family members who were being treated at the hospital. “I rushed to the scene and I am looking for them and cannot find them. My family members are missing. I don’t know what to do,” shopkeeper Muqim Ahmad told AFP, saying his wife and mother were inside the facility at the time of the blast.

Trump’s declaration this month that the talks were “dead” spurred the Taliban to declare last week that the only other option was more fighting, sparking fears of an uptick in attacks ahead of presidential elections at the end of the month.

Earlier this week, the Taliban killed nearly 50 people and wounded dozens more in two separate attacks—one near a campaign rally for President Ashraf Ghani in the central province of Parwan, and one in Kabul. The militants have vowed to disrupt the upcoming presidential election, scheduled for Sept. 28, in which Ghani is taking on his own Chief Executive, Abdullah Abdullah, and more than a dozen other candidates.

The winner is hoping for a mandate to negotiate with the Taliban for a lasting peace in the country suffering from decades of violence. The insurgents, however, are set on undermining the legitimacy of the process and keeping the president weak.

But even as fighting rages, the Taliban have also continued to voice their belief that the U.S. would eventually return to the table for more negotiations. Chief negotiator Sher Mohammad Abbas Stanikzai reiterated that stance in an interview with the BBC earlier this week, stating “our doors are open for negotiations.”

Trump has also been eager to end America’s longest war, launched nearly 18 years ago after the September 11 attacks on the US. But he has also accused the Taliban of bad faith for launching an attack in Kabul that killed a U.S. soldier, and others, ahead of a scheduled sit down at Camp David that was later cancelled by Trump.