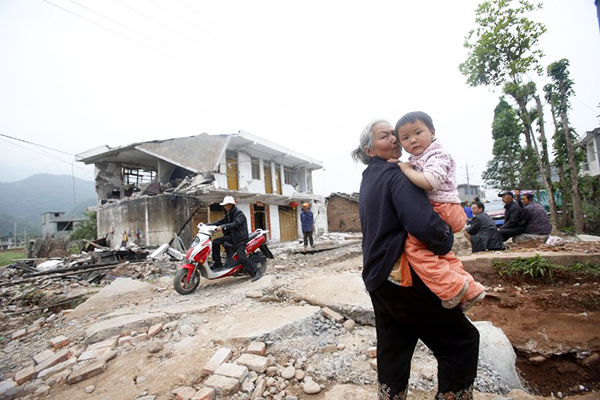 More than 11,300 people have been injured from Saturday’s quake.

Thousands of rescue workers combed through flattened villages in southwest China on Sunday in a race to find survivors from a powerful quake as the toll of dead and missing rose past 200.

Dressed in bright orange uniforms, rescuers battled their way up mountain paths strewn with wreckage to reach isolated parts of Sichuan province on the edge of the Tibetan Plateau. Troops had worked through the night, searching villages where houses had been destroyed for survivors and treating those injured in the quake.

China’s new prime minister, Li Keqiang, rushed to the disaster zone to oversee rescue efforts in his first major public test since taking office in March, before returning to Beijing late Sunday, China Radio National reported. Li said on Saturday that the first 24 hours were “the golden time for saving lives,” as China’s new leaders respond to a fresh disaster five years after another Sichuan earthquake left more than 90,000 people dead or missing.

The rescue operation was hampered by huge queues of traffic—some stretching back for 20 kilometers—clogging roads into the disaster zone. “We really want to go in and help people, but instead we are waiting in traffic,” one frustrated relief official said in his car, as large numbers of volunteers tried to head to the zone.

Boulders the size of cars littered streets in Lushan county, the epicenter of the earthquake. “Three people died in that building, and no one wants to live in this area anymore because it is too dangerous,” a 45-year man surnamed Yang said, surrounded by rubble from the quake.

More than 2,000 aftershocks have followed since the quake struck Saturday morning. Chinese seismologists registered the tremor at a magnitude of 7, the U.S. Geological Survey at 6.6.

Firefighters helped by sniffer dogs have pulled 91 people alive from the rubble, Xinhua said, citing the Ministry of Public Security.

At Lushan People’s Hospital, a steady stream of ambulances continued to arrive in the early hours of Sunday. Most victims were taken to tents erected on the grounds of the hospital, where doctors treated the injured.

A 68-year-old woman with a broken arm spoke of the terror she experienced when the earthquake struck. “It was as if the mountain was alive,” she said. “Now I have no home to go. So I don’t know what I am going to do.”

President Xi Jinping ordered all-out efforts to minimize casualties, Xinhua said.Quake-prone Japan, which has been mired in tensions with China over a high-seas territorial dispute, offered any help that is required. “Japan is ready to offer its maximum support,” Prime Minister Shinzo Abe said in a message to Xi and Li, according to Japan’s foreign ministry.

In Rome, Pope Francis said his “thoughts go to the numerous people” affected by the disaster. “We pray for the victims and for those who are having to endure suffering because of this violent earthquake,” he said during Sunday prayers in St. Peter’s Square.

China’s foreign ministry thanked the international community for offers of assistance, but said “foreign rescue teams and medical materials are not required now,” due to difficulties reaching the disaster area.

More than 17,000 Chinese soldiers and police have joined the rescue mission and five drones were sent to capture aerial images, Xinhua said, as well as aircraft carrying out rescue and relief work. A military vehicle carrying 17 troops headed for the quake area plummeted over a cliff on Saturday, killing one soldier and injuring seven others.

The disaster has evoked comparisons to the 2008 Sichuan quake, which occurred just 200 kilometers from Lushan, and was one of the worst to strike China in decades. The 2008 quake generated an outpouring of support, but public anger erupted after the discovery that many schools fell while other buildings did not, creating suspicions of corruption and corner-cutting in construction. The deaths of the children became a taboo subject in the heavily-controlled domestic media and on social media websites.

But the response on China’s Twitter-like “Weibo” sites to Saturday’s quake has overwhelmingly been one of support, with thousands pledging to donate money and others mourning the victims.

Earthquakes frequently strike China’s southwest. In April 2010, a 6.9 magnitude quake killed about 2,700 people and injured 12,000 in a remote area of Qinghai province bordering the northwest of Sichuan.