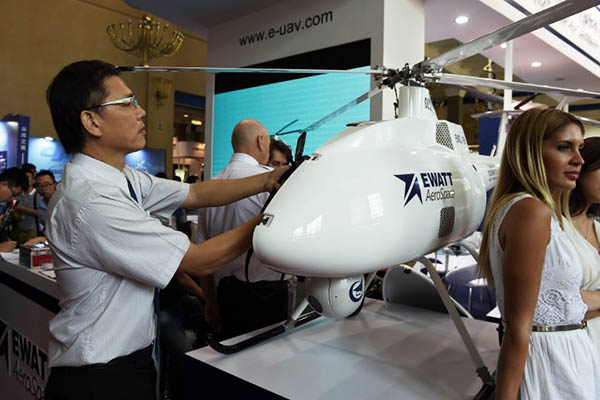 Report claims drones are capable of staying in the air for more than 10 hours.

China has exported military drones to more than 10 countries in deals worth hundreds of millions of dollars, and plans to sell unmanned craft capable of launching laser-guided bombs, state-run media said Thursday.

Chinese drones “have bigger payloads, which means they can carry more weapons” than their competitors, Shi Wen, chief drone designer at the China Academy of Aerospace Aerodynamics, told the China Daily newspaper.

Chinese companies dominate the global market for commercial drones, but the rare interview is a sign Beijing is seeking to promote itself as a manufacturer of unmanned military surveillance and killing machines.

Shi did not specify the countries involved, the numbers sold or the total value of the deals, but said the academy’s most valuable sale was worth “hundreds of millions of U.S. dollars.”

The drones are named Cai Hong, or Rainbow, with the bestselling CH-3 capable of firing missiles 10 kilometers from a target and staying in the air for more than 10 hours, the report said. “One of our clients in Africa uses each of its CH-3s about 100 hours on average each month,” Shi told the newspaper, which is published by the government.

The academy is seeking an export license for a new CH-5 model capable of launching air-to-surface missiles and laser-guided bombs, Shi added.

The drone made its first test flight in August, the newspaper said.

China has also exported smaller unarmed search aircraft, it said, citing a report last year that the academy would export about 200 drones.

China has leapfrogged both France and Germany to become the third-largest source of major arms globally, with its exports up 88 percent in the 2011-15 period compared to the previous five years, according to the Stockholm International Peace Research Institute (SIPRI). SIPRI’s February report added that Chinese weapons chiefly went to other Asian countries, with Pakistan the main recipient.