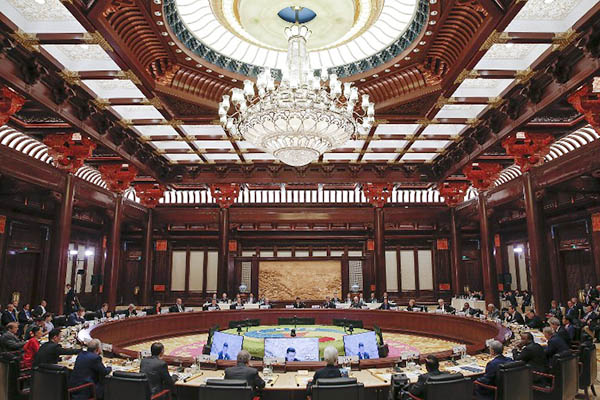 China on Sunday touted its new Silk Road as “a project of the century” at a summit highlighting its growing leadership on globalization, but a North Korean missile test competed for attention.

President Xi Jinping hosted leaders from 29 nations for the two-day summit in Beijing ending Monday after U.S. and South Korean military officials confirmed that Pyongyang had launched a ballistic missile. Delegations from North Korea and the United States attended the forum, though not their leaders. Few Western heads of government made the trip.

The summit is showcasing Xi’s cherished One Belt, One Road initiative, a revival of the ancient Silk Road trading routes that could further expand China’s growing global influence on trade and geopolitics.

“This is indeed a gathering of great minds,” Xi said, addressing leaders from Russian President Vladimir Putin to Turkish counterpart Recep Tayyip Erdogan and Philippine President Rodrigo Duterte. Xi pledged to pump an extra $124 billion in funds into the initiative, calling it “a project of the century” in a “world fraught with challenges.”

The Chinese-bankrolled project seeks to link the country with Africa, Asia and Europe through an enormous network of ports, railways, roads and industrial parks. The initiative spans some 65 countries representing 60 percent of the world population and around a third of global gross domestic product. The China Development Bank has earmarked $890 billion for some 900 projects.

While Xi did not mention North Korea during his speech, it was discussed at his bilateral meeting with Putin. “Both parties expressed their concern over the escalation of tensions” on the Korean peninsula, Kremlin spokesman Dmitry Peskov told reporters.

The Chinese foreign ministry said in a statement it opposed such missile tests and called for restraint from all parties. The delegates from both Koreas held a brief meeting at the summit, according to South Korea’s Yonhap news agency.

But U.S. embassy spokeswoman Mary Beth Polley told AFP that the two officials did not hold a meeting. “No small talk, nothing,” she said.

North Korea relies heavily on trade with China for its economic survival, and U.S. President Donald Trump has urged Xi to use that leverage to put pressure on Pyongyang. The White House called on all nations to impose “far stronger sanctions” following the latest test, which came days after South Korea elected a new president.

Xi focused on his initiative, boasting that it represented a “road for peace,” but he cautioned that “all countries should respect each others’ sovereignty… and territorial integrity.” He warned that “isolation results in backwardness.”

“The ideas of openness, trade freedom are rejected more and more, very often by those who were their supporters not so long ago,” Putin said.

While Trump railed against China’s trade policies during the U.S. election, he has nurtured friendly ties with Xi and his envoy to the summit said U.S. companies were ready to get involved in the Silk Road. “U.S. firms can offer the best-value goods and services required over the life of a project,” Pottinger told the forum, though he warned that success would depend on transparent government procurement, among other things.

German Economy Minister Brigitte Zypries echoed calls for transparency to ensure that the calls for bids are “non-discriminatory.”

Some Belt and Road projects are raising concerns in certain countries. India has voiced displeasure at the China-Pakistan Economic Corridor, a Belt and Road project aimed at linking northwestern China to the Arabian Sea. The route cuts through Gilgit and Baltistan in Pakistan-administered Kashmir, disputed territory that India claims is illegally occupied.