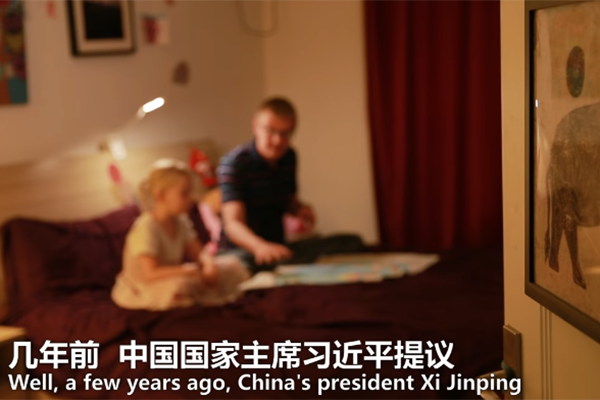 State-run media releases series of videos touting the One Belt, One Road program ahead of two-day summit

A video of an American father telling his daughter bedtime stories about the Chinese president’s signature project. A music clip with children singing about sharing “the goodness.” A cartoon of a whisky bottle riding a train. Chinese propaganda is going to great lengths to tell the world about President Xi Jinping’s ambitious project to revive Silk Road trading routes with a massive multi-country infrastructure program.

State-run media has bombarded the Internet with a series of videos touting Xi’s One Belt, One Road Initiative ahead of a two-day summit on the project on Sunday, to be attended by nearly 30 world leaders. The clips are aimed squarely at a foreign rather than a domestic audience, appearing on Facebook, Twitter and YouTube—all of which are blocked in China.

China Daily has posted episodes of Erik Nilsson, an American journalist who works for the state-run newspaper, telling bedtime stories about the project to his daughter.

In the first episode, he used a map and Lego blocks to explain how the multi-billion-dollar plan would help move goods around the world more easily. “It’s China’s idea, but it belongs to the world,” Nilsson tells his daughter before turning the light off in her bedroom.

In an email to AFP, Nilsson said he developed the concept with Chinese colleagues based on his experience of talking to his daughter about his work trips. “The Belt and Road series was fundamentally natural because it’s essentially how she and I actually talk before I take business trips,” he said. “Our team believes this format presents the Belt and Road in a way that simply explains an enormously complex initiative so that all audiences, foreign and Chinese, can understand,” Nilsson wrote.

Xi’s initiative aims to connect Asia to Europe and Africa with a massive network of rail, road and maritime links. But analysts also see it as an effort by China to project soft power and take the mantle of globalization as the U.S. turns inward under President Donald Trump’s “America First” policies.

Another cartoon, called Bon Voyage, Whisky, followed the 20-day journey in April of a whisky bottle riding the first rail freight service linking Britain to China. Whisky’s eyes turn into hearts when he sees a vitamin bottle in a pink dress on the China Railway Express. They end up together on a shelf in a Chinese family’s dining room.

Analysts say the videos were made in part to address criticism that the plan is less about providing investment opportunities for foreign countries than developing export markets for China. The videos try “to convince people outside of China that this policy is a good one that works for everybody,” said Li Yang, assistant professor of marketing at the Cheung Kong Graduate School of Business.

Nicole Talmacs, media studies lecturer at Xi’an Jiaotong-Liverpool University, said the videos are not only for children. “The notion of a ‘bedtime story’ is very likely simply a means of ‘sweetening’ or removing any perceived aggression or threat that some may feel about the OBOR initiative,” she said.

It is not the first time that China features foreigners in videos to promote a government program. In 2015, state news outlets posted a psychedelic music video to explain the country’s “13th Five-Year Plan” development roadmap. “This is part of a larger trend in which Chinese state media are trying to reach a global audience,” said Manya Koetse, who tracks social trends in China as editor of What’s on Weibo. “Chinese propaganda in 2017 is not like Chinese propaganda in 1997. It is developing along with the trends of its time, serving slick bite-size videos to people on their mobile phones, with music and narratives that suit the audiences of today,” Koetse told AFP. “They showcase China’s role in the world as a harmonious leader that helps the whole world become a more prosperous place.”