Former prime minister, using his euphemism for the military establishment, claims it is pressuring institutions to act against his party 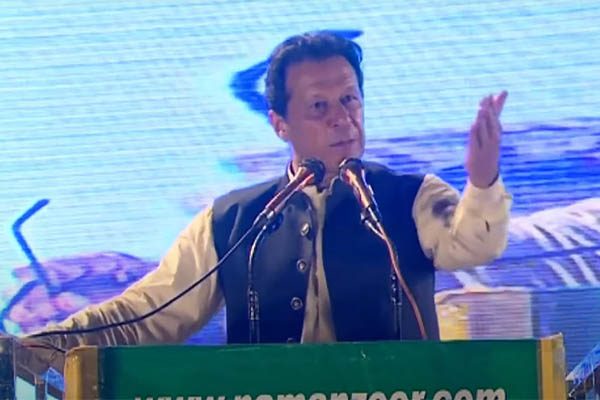 Pakistan Tehreek-e-Insaf (PTI) Chairman Imran Khan on Sunday renewed his allegations of the “neutrals”—his euphemism for the military establishment—being responsible for a “crackdown” against his party.

Addressing a rally in Rawalpindi, he claimed he would not be deterred by and pressure continue his “movement for real freedom” until it had achieved its goals. “On May 25, when police used violence against us, I was told by insiders that the police were ordered from above, which means that neutrals pressured them to give PTI workers a thrashing,” he alleged, referring to the PTI’s long march on Islamabad earlier this year, and questioned if the “neutrals were really neutral.”

Similarly, he alleged, the disqualification case pending against him before the Election Commission of Pakistan (ECP) had also come “from above,” as he pulled back from accusing Chief Election Commissioner Sikandar Sultan Raja of bias against the PTI. “He [CEC] was not doing anything on his own and was facing pressure from above,” he said.

The ousted prime minister reiterated that Islamabad police had informed the PTI they had not inflicted any “torture” on his chief of staff, Shahbaz Gill, and it had happened elsewhere. “They [police] are also pointing fingers towards you [neutrals] … whenever anything wrong happens in Pakistan, you are blamed for it,” he said, further alleging that authorities had been harassing visitors to his Islamabad residence at Bani Gala. “If you stand with these people [ruling coalition], will the nation stop thinking of them as thieves,” he questioned, and reiterated claims that authorities wanted to “get rid” of him by throwing him in jail and sidelining the PTI.

Reiterating claims that the PTI was the “biggest party” in the country, he said attempts to break it would hurt the country. “Political parties are the glue that keeps the country together,” he said, despite several attempts of his government during its tenure in power to break up his rival parties.

The Pakistan Electronic Media Regulatory Authority (PEMRA) had, a day earlier, banned the live telecast of Khan’s speeches after he appeared to threaten senior police officers and a judge during a demonstration in Islamabad. As a result, the speech was not shown live on any channel but was still available on social media platforms, including Facebook and YouTube.

In a seeming bid to prevent access, YouTube was “briefly” inaccessible on several internet providers during Khan’s speech, according to internet tracking website NetBlocks. “NetBlocks metrics confirm the disruption of YouTube on multiple internet providers in Pakistan on Sunday, Aug. 21, 2022,” it said in a statement, adding that data showed that the ban was inconsistent and YouTube remained accessible on several providers.

According to NetBlocks, all disruptions ended as soon as Khan’s speech concluded.

“After PEMRA blocked live transmission of my Pindi jalsa speech on TV channels, imported government blocked YouTube midway through my speech. This just shows the desperation of those who for their self-interest are willing to push Pakistan towards political and economic chaos,” Khan posted on Twitter, describing the action as a “gross violation” of freedom of speech that also negatively affects the digital media industry. “What they need to understand is that no matter what they do, they cannot suppress the will of the people which is Haqeeqi Azadi,” he added.

The PTI has already announced it would challenge PEMRA’s ban on the live broadcast of Khan’s speeches in court.